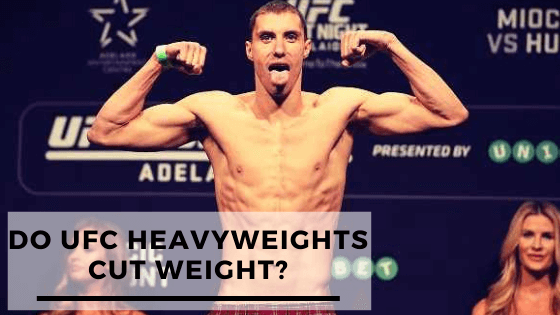 The simple answer? Yes, they do.

Since the introduction of weight classes, the maximum weight limit for the heavyweight division is 265 lbs.

This means, that while most heavyweights don’t necessarily need to cut weight to compete, those who weigh over 265 lbs require a weight cut to fight.

That said, a lot of UFC fighters tend to be a bit out of shape between fights.

A fighter weighing 250 lbs, could cut to around 240 lbs during fight preparations, not due to the limit, but simply to improve general fitness, sharpness, and mobility.

1. How much weight do they cut?

On average, a UFC fighter cuts about 15-20 lbs before the fight. In extreme cuts, some fighters lose upwards of 40 lbs.

In the case of heavyweights, weight-cutting is less of an issue than in the other divisions.

The division is open from 206-265 lbs for title fights, and 266 lbs for non-title fights, so more heavyweights fight closer to their natural weight than in any other division.

Many weigh in well under the 265 lbs limit.

These men are rightly regarded as the best heavyweights to ever grace the octagon, relying on mobility, insane pressure, relentless cardio, and elite technique to dominate heavier opponents.

2. How many UFC heavyweights need to cut weight?

There is no specified number of heavyweights who need to cut weight, but the UFC heavyweight division has been home to some real giants.

Over the years we’ve seen quite a few who walk around above the 265 lbs limit.

Some of the most popular among them are:

He remains the only fighter above 7 feet tall to compete in the UFC.

While he was not particularly bulky, he required a weight cut to make the heavyweight limit.

He was a sight to behold in the octagon.

The man is built like a literal titan, weighing around 300 lbs and having to cut to 265 lbs.

Lesnar transitioned from the WWE to UFC, using his size and NCAA wrestling prowess to snatch the heavyweight belt.

Standing at just 5”11, “The Super Samoan” required a massive cut from around 300lbs to make weight. Packing insane power and a granite chin, Hunt spent his career fighting taller fighters.

The UFC knockout king weighs around 295-300 lbs out of camp.

Lewis has one of the most excruciating weight cuts in the division.

“The Black Beast” sometimes has to cut as much as 35 lbs to make weight.

The current heavyweight champion is said to walk around at about 280 lbs.

Made of pure muscle, “The Predator” is a unique physical specimen.

The Australian is known for his knockout power and insane celebrations in which he drinks beer out of a shoe.

The only heavyweights to have ever missed the weight limit are Greg Hardy and Justin Tafa.

Now released from the roster, Hardy came in at 266.5 lbs and was given an extra hour to make weight which he gratefully utilized.

Justin Tafa was not so lucky, failing again on his second try at 267 lbs.

The issue of extreme weight cutting, referred to by insiders as weight bullying, is increasingly becoming a conversation.

Many fighters are accused of cutting too much weight to avoid facing opponents the same size as them, thus gaining advantages.

Fighters are required to weigh in on the morning of the day before the fight to meet the limit, then they are permitted to rehydrate within the next 24 hours.

This means they regain most of their weight and are heavier than the limit on fight night.

There are no statistics to prove that this size advantage on fight night directly translates to more wins.

However, guys like Khabib Nurmagomedov, Dustin Poirer, Paulo Costa, and many others have cut massive weight to fight in their registered divisions.

Sometimes cutting as much as 40 lbs, risking life-threatening side effects like seizures, comas, collapsed kidneys, and even death.

Fortunately for the heavyweights, they have the biggest elbow room, allowing for a range of

Can UFC Fighters Pick Who They Fight Like Boxers Do?