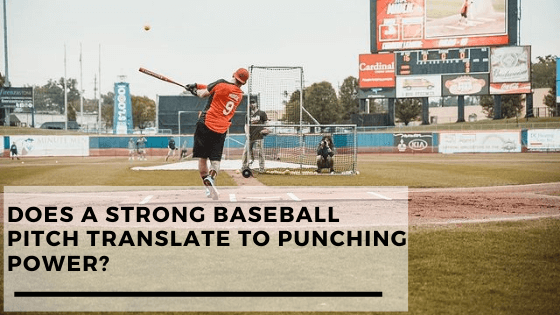 Whatever purpose you may need to generate the force for, the force is going to be generated from the ground up, so if you want to throw a punch or throw a pitch.

The power generation for that purpose is going to start from your feet and travel all the way to your hands.

Power is generated from the bottom of your body all the way to the top when punching or pitching.

To get the greatest power out of a punch or pitch, you must engage your entire body in the force, spinning and giving momentum to propel the punch or pitch.

Finding a balance between speed and force, rather than one or the other, is the key to throwing a more powerful punch or pitch.

1. Similarities between pitching and punching

The similarities between a pitcher firing a fastball and a boxer throwing a punch are undeniable; the hips, leg drive, and shoulder twisting are all the same in both.

The wrist is the only difference.

When throwing a ball, a boxer’s wrist is solid, whereas in baseball, the wrist is a moveable joint, although this may be the only difference.

Beginners can be shown that in order to obtain power in punches, they should throw them like a fastball. Creating speed and power with the lower body

2. Are the mechanics of throwing a hook similar to pitching?

While distance and greater velocity make this appear the more likely cause of the fastball and hard punches, the best fastballs and hardest punches are thrown using the power generated from your feet up.

Let’s say you throw a solid right hand after your left jab.

When you snap that right hand forward, your back right foot would twist a little bit.

Indicating that it is driven from the ground, your hip would drop forward, your shoulder would snap, and your arm would come out straight to the target.

Like a whole body working in synchronization for the common output.

In a similar manner, pitching mechanics is a synchronized series of body motions and muscular forces with the purpose of achieving high ball velocity and target precision.

Starting from the ground up, an intricate relationship between increasing the speed of body segments dictates a successful pitching motion.

The lower extremity, pelvis, and trunk are in charge of commencing kinetic force creation and establishing a basis of support for the subsequent segments.

Especially the shoulder complex and elbow, which then apply force to the baseball.