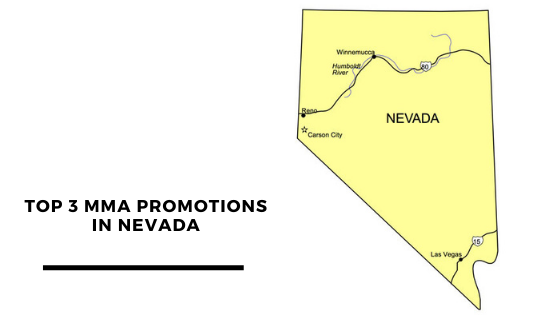 Nevada is known as the home of UFC, the top MMA promotion in the entire world.

They also have other promotions in the state such as; UFC, Tuff-N-Uff, World Fighting Championships

It was founded in 1993 by Art Davie and Rorion Gracie and a few others.

The current president is the famous Dana White who sets up fights with the best fighters in the world.

Fights are all held in the Octagon cage matches.

UFC continues to grow globally, and so far has had over 600 events and over 6500 matches internationally.

There are many PPV options around the world, including BT Sport in the UK, Globosat in Brazil, and many more.

Tuff-N-Uff was started in 1994, with the main goal to promote amateur MAA events in the United States, especially in Nevada.

So far, Tuff-N-Uff has had over 115 events. They are the premiere amateur MMA promotion in the country.

Fights are available on all major television providers (Cox, Fios, Dish, Spectrum), beIN sports, as well as Sling and FuboTV.

Links to the fight replays can also be accessed on tuffnuff.com

WFC is a combat sport promotion based in Las Vegas that promotes MMA, boxing, and kickboxing.

There are other WFC branches in different states as well.

Founded in 2012 and with a strong relation to casinos in Nevada, WFC has become very active since President Matt McGovern started the promotion.

The fights hosted by WFC have been hosted in over 25 different markets in the US and featured on major broadcasters such as; ESPN, USA TODAY, CNN, Inside MMA, and Fox Sports.

Don’t Ever Try These BJJ Submissions in A Street Fight