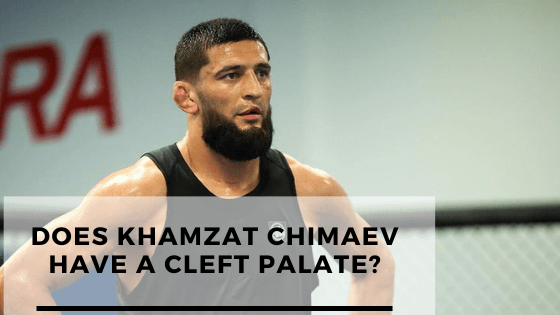 Khamzat Chimaev has a prominent scar on his face, which has led many followers to wonder what happened to him to cause such a big scar and many fans pondered if he had a cleft lip.

However this isn’t the case.

Chimaev had facial and lip injuries as a toddler after falling down the stairs.

The UFC fighter continues to suffer as a result of the horrific fall he took as a child.

He claims that he is still unable to breathe through his right nostril, which only serves to highlight his extraordinary ascension through the ranks of the UFC.

Chimaev explained the origins of his disfigured lip in a YouTube interview in 2020. As he stated:

“My mom told me this, but I don’t remember myself. I was two years old, and we had a big staircase in our house, and I fell down on the concrete. I had a ripped lip; a couple of my teeth were knocked out and I also broke my nose. I still can’t breathe from my right nostril.”

There are a lot of people who don’t like Conor McGregor because of what he says and how bad he is at smoking other people.

Chimaev has also been his target.

His lip scar has been teased mercilessly by Conor McGregor, who called him “rat lip” for his scarred appearance in a later deleted social media comment.

Assuming Chimaev was born with a cleft lip or palate, McGregor tried to humiliate him.

Later, Chimaev answered Conor through one of his tweets where he literally stated:

“@TheNotoriousMMA Tab machine king chicken heart @danawhite I’m hungry give me Give me dessert”. Prior to calling the Irishman “chicken heart” and asking for “dessert,” the 26-year-old may have implied that the Irishman was a “tap machine.”

How To Rehydrate After a Weight Cut?

How Do MMA Fighters With Bad Eyesight Fight?