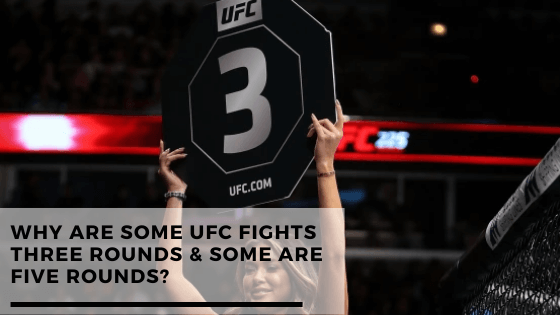 A UFC fight comprises several 5-minute rounds. It could be either  3 or 5 rounds depending on the occasion. The majority of UFC fights last for 3 rounds.

The distinction is that a regular fight is a 3-rounder, while main events, co-mains, or title fights last for 5 rounds.

Every fight card is headlined by the main event, and optionally a co-main event.

These fights are the only ones that last for 5 rounds. It must be said that a title fight is usually either a main or co-main event.

Most fighters spend the bulk of their career fighting 3 rounders, never having fought in a fourth round.

On the other hand, a superstar like Max Holloway has only fought 5 rounders for 7 consecutive years, or Jon Jones for 9 years.

When it comes to preparing for these fights, the game plans differ.

Guys like Petr Yan and Jones have been seen to hold back in the first couple of rounds, making reads of their opponents and conserving energy.

Then pouring it on as the fight progresses while the rival begins to fade.

However, these tactics are unsuitable for 3 round fights, where it is better to go with full intensity from the starting bell.

Are there any exceptions?

As with most other things, the UFC can make exceptions to the number of fight rounds when their favorites are involved.

At UFC Fight Night 163, Zabit Magomedsharipov faced Calvin Kattar in a main event after Junior Dos Santos got ill and withdrew from the intended headliner between him and Alex Volkov.

Volkov went on to face Greg Hardy, as a co-main event and also 3 rounds.

This event generated plenty of discussion in the UFC universe.

Zabit was a fan favorite, one of the Dagestani who has such a good reputation in MMA.

A well-rounded fighter with elite talent.

However, a noticeable pattern was that he’s a fast starter who unloads his flashy arsenal before beginning to succumb to fatigue in the 3rd round.

It was rumored that at his team’s request, this fight was allowed to remain a 3-rounder despite being promoted to the main event.

True to the narrative, Zabit won the first two rounds before fading in the third, though he still won the fight.

But in justification of the UFC, earlier in the same year, when Rob Whittaker pulled out from his main event fight with Kevin Gastelum, Israel Adesanya vs Anderson Silva was moved up to the main event while remaining a 3-round fight.

More recently, at UFC 263, Nate Diaz faced Leon Edwards in a 5 round bout despite not being able to headline the card due to 2 title fights on the main and co-main event.

Nate is a showman and a joy to watch. One of the needle-movers on the roster who can make demands of the UFC and have them granted.

It is common knowledge that he prefers to fight for 5 rounds, one of his best attributes being infinite cardio.

The decision to make this fight 5 rounds was justified in the end.

With one minute left on the clock, Diaz completely stunned Edwards with a combo after having lost every previous second of the fight.

Edwards seemed to be out on his feet, but Nate, being Nate, failed to capitalize and instead began taunting and pointing at him.

This little spectacle at the end of the fight was the most entertaining piece of action on the card.

Afterward Dana White said; “Nate will be asking us for 10 round fights now”, affirming the belief that it was at Diaz’s request that the exception was made.

In a UFC fight, the fighter who has won more rounds is awarded victory by the judge’s decision.

Other ways to win are by knockout or submission.

The types of decision victories there are:

Where all three judges declare the same fighter as the winner.

Two judges declare one fighter winner while the third judge scores it a draw.

Two judges declare one fighter the winner and the third judge scores it the other fighter.

A UFC fight can also be declared a draw if they have been fought to a standstill. A draw could either be:

All three judges declared the fight a draw.

Two judges declare a draw while the third judge scores one fighter as the winner.

One judge scores it a draw, and the other two judges have declared the opposing fighters as winners.

ONE FC Vs. UFC (statistics) Who Is Bigger On Social Media?

How Can I Defend Against A Flurry Of Punches?