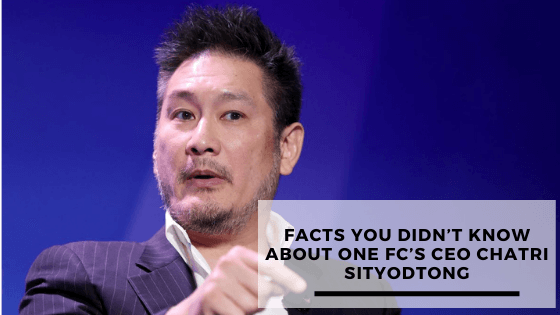 1. Who is Chatri Sityodtong?

They are both MMA promotions and some of the biggest in Asia and around the world.

2. What is Chatri Sityodtong’s nationality?

Chatri is half Japanese from his mother’s side and half Thai from his father’s side.

He was born and raised in Thailand.

3. Where did Chatri go to school?

Chatri went to Tufts University (Massachusetts, USA) and then did his MBA degree at Harvard Business School.

He went on to start a company while keeping MMA coaching on the side.

4. What was the first company Chatri started?

He started an internet software company in San Francisco (Silicon Valley) and after growing the business more than ten-fold, he sold it.

5. What did he do after selling his first company?

He went to Wall Street and started a hedge fund that later become worth 500 million dollars.

Although many would call him successful at that point, Chatri felt completely empty inside, which led to sleepless nights and depression.

Chatri then retired as a hedge fund manager and decided to make martial arts his full-time life.

6. What led Chatri to Muay Thai?

As a kid, Chatri was all about getting justice for those who couldn’t stand up for themselves.

Along with wanting to impress girls at the time, Chatri’s main focus was to fight bullies and show them that he is stronger than them.

7. What martial arts did he practice?

He has been doing Muay Thai for 35+ years and is a jiu-jitsu brown belt. He also trains at least 5 times per week.

8. Why does Chatri think martial arts are so important?

Besides the focal reasons of physicality to a nice physique, you develop a warrior spirit after years and years of training to conquer any sort of adversity in life.

9. Where did Chatri start Evolve and who did he hire?

He hired Pi Tu, his first Muay Thai instructor who was still very poor, and then was able to provide a great life for him.

10. What is Chatri’s mission for ONE Championship?

Since day 1, their mission is to unleash real-life superheroes who ignite the world with hope, strength, hope, dreams, and inspiration.

Ultimately, it’s all about unleashing your greatness in life to give back what we were given and leave this

11. What are Chatri Sityodtong’s real and ring names?

12. What is the beef between Chatri Sityodtong and Dana White?

Chatri believes that Dana White is a great businessman, but disagrees with how White treats his fighters badly (public humiliations) and does not pay them enough for the value that they provide.

On the other hand, Chatri pays his fighters well and thinks of them more as ‘peers’ rather than employees.

This may be one big reason why fighters like Sage Northcutt, Eddie Alvarez, and others left the UFC to join ONE Championship.

Chatri Sityodtong has an estimated net worth of US$350 million

14. Who are Chatri Sityodtong’s wife and children?

So far, Chatri has not been married and is still single.

15. Who is Chatri’s best friend and business partner?

They met at Harvard’s orientation day and became best friends since then.

Mittal now is on the board for ONE Championship and has helped Chatri run the business since 2011.

16. What kind of charities is Chatri involved with?

Chatri supports the Global Poverty Project and is a major donor to the Boys’ Town Home, which serves children that have been abandoned and are in need.