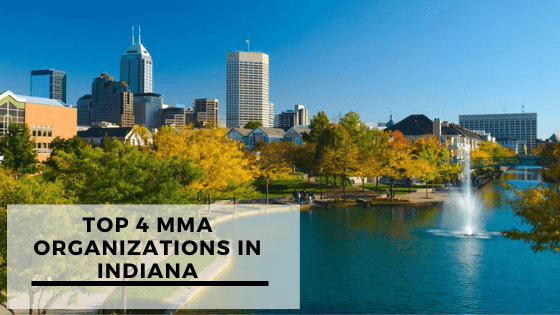 The sport of MMA has enjoyed a dramatic increase in popularity and size ever since the 1990s, both internationally and locally.

With numerous promotions now spread all across the world and the US, it’s easy to see why this growth happened so quickly.

Here, we’re going to be taking a look at the top MMA promotions in one of the most populous states in the US; Indiana.

THE BEST MMA PROMOTIONS IN INDIANA

LFA organizes fights almost every week, and its fights are usually aired on UFC Fight Pass, this close affiliation with the UFC is why many have dubbed the LFA the college football of MMA.

Another reason for this is the fact that a total of over 176 fighters, including champions like Henry Cejudo, Kamaru Usman, and Valentina Shevchenko, have all made successful jumps from LFA to the UFC.

Number two on our list is Art of Scrap.

Art of scrap is an MMA fight show, based in Fort Wayne, IN.

Although, a very new promotion, with its first-ever event held in February 2021.

The organization has achieved a somewhat spectacular growth, in size and popularity, with UFC and Bellator veterans already making an appearance in the promotion.

As of the time of writing this, there is no official link to watch fights from this promotion online, but you can get tickets online at artofscrap.com to see the fights live at the Memorial Coliseum Arena, in Fort Wayne.

Self-acclaimed Indiana’s Premier MMA promoter, Colosseum Combat is one of the biggest promotions to come out of Indiana in recent years and has been existing since 2010, it’s not hard to see why.

Although they have a rather small social media following, the promotion possesses some of the best young fighters, not just in Indiana, but in the entire US.

Tickets to watch their fights live are sold at their website link which is present on their Instagram page.

Coming in at number four in our list is GE fights, otherwise known as Griggs Entertainment is one of the biggest MMA promotions in Indiana.

In conclusion, it’s fair to say that the recent increase in MMA activities and promotions around Indiana will only lend itself to more world-class fighters coming up from the grass-root level, to achieve their enormous potential.

The 3 Best Grappling/BJJ Organizations In Texas