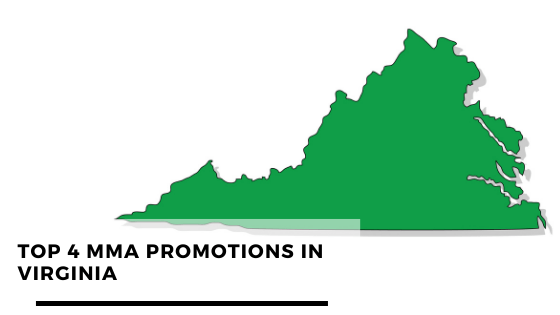 If you are an MMA fan in Virginia there are multiple local organizations that host professional and amateur events.

These promotions offer value for money entertainment and you can watch local favorites battle it out in the cage.

These are 4 of the best MMA promotions in the state.

First off, we have Cagezilla FC which was founded in 2007 under the name Operation Octagon.

It prides itself on being the DC Metro area’s longest-running Mixed Martial Arts promotion.

It boasts of providing Vegas-style light, sound, and video production.

The fights usually take place at the Salisbury Center in Manassas.

Presently, general admission for Cagezilla events is priced at $50.

Reserved seating may cost between $65-$90 depending on the row.

The cost of VIP seating ranges from $150 to $1500 depending on the seating arrangement.

The fights will be streamed live on the organization’s website.

Another up-and-coming organization is Rocket Combat Sports which is based in Orange County.

It started off as the pipedream of Chris Rollin who had spent around 10 years in combat sports.

In 2019, the first event called Battle at the Hornets’ Nest was held.

Next on the list is Outlaw Fight League which is a relatively new MMA promotion based in Harrisonburg, Virginia.

This organization holds exhibition fights and amateur MMA fights. The events have a mix of MMA, Muay Thai and boxing matches.

It has held 3 events over the past 2 years with Outlaw Fight League 3: Heartbreaks & Headaches being the latest.

The fights are usually held at the Rockingham County Fairgrounds at Harrisonburg.

Tickets for the venue usually cost around $35.

Finally, we have Immortal Fighting Championship which is a Virginia Beach-based fighting promotion.

On January 15, 2022, its first event, Immortal Fighting Championship 1, was organized.

The main event was won by Rochelle Peebles III with an astounding KO during the first minute of the first round.

Top 4 MMA Promotions in the State Of Georgia