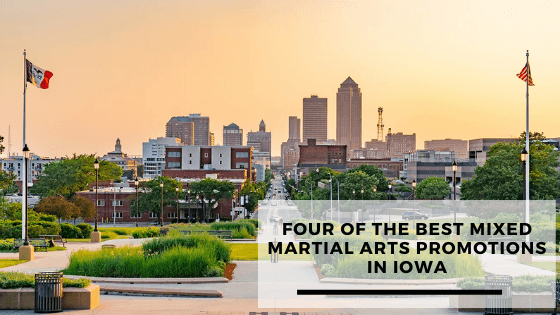 Like many other states in the US in recent years, Iowa has been credited with bringing forth a handful of world-class mixed martial artists.

Fighters such as former UFC Featherweight elite, Jeremy Stephens, UFC Hall of Famer, Pat Miletich, and PFL Light heavyweight Rakim Cleveland, among others all hail from the state of Iowa.

Well, today, we’re going to be taking a look at some of the biggest MMA promotions in Iowa.

THE BIGGEST MMA PROMOTIONS IN IOWA

Iowa’s self-proclaimed “premier mixed martial arts competition” is one of the biggest, if not the biggest MMA organizations to come out of Iowa.

Hosting its first event in February 2006, the MCC has gone on to hold 69 events over the past 16 years, with approximately 430 matches of high-level martial arts.

Coming in a close second on our list is Caged Aggression, which was founded by Mike Goodwin.

Since its first event in 2011, CAMMA has gone on to hold a total of 44 events, with approximately 178 matches.

Of all the promotions to come out from Iowa in recent years, it can be argued that this promotion has made the most strides in terms of growth.

You can catch their live events by purchasing tickets from nitrotickets.com, and converging at the River Center, IA

Perhaps, no promotion captures the Idea of growth and family quite like Truth Revelation.

The family-owned promotion started as nothing more than a means to provide the youth of Ottumwa with a more positive environment, but it has grown to be one of the most popular promotions in Iowa.

From the year 2010, it evolved into more of a promotion, but it still maintained its roots.

With over 33 events held to date, the promotion is known most of all for its exciting, even matchups, instead of just one-sided beatdowns.

Tickets to live shows and events can be gotten at www.truerevmma.com.

Coming in at number four on our list is the AFC.

For years, more specifically 8 years, the AFC has been known for discovering amateur fighters and promoting them to larger and bigger promotions.

UFC featherweight Luis Saldana, among a few, is one of the fighters that has broken through the ranks from the AFC to the “big leagues”.

You can get tickets to its live shows by going to nitrotickets.com.

The 3 Best Grappling/BJJ Organizations In Texas