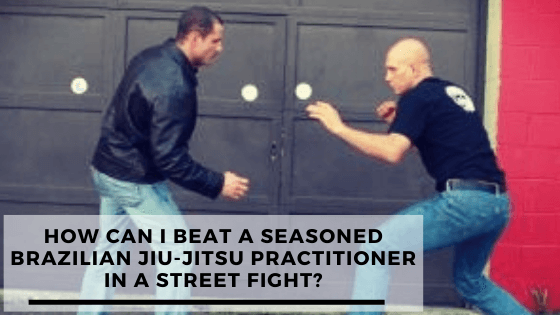 Winning a professional fight against a Brazilian Jiu-Jitsu(BJJ) practitioner is considered one of the most difficult tasks.

However, winning against one in a street fight may just be slightly easier.

Here’s a simple guide on how to beat a seasoned Brazilian Jiu-Jitsu practitioner in a street fight.

The best chance you have at winning any kind of fight with a grappler is if you stay on your feet.

Don’t allow yourself to engage in grappling or wrestling.

The best way to do this is by keeping yourself out of a grappler’s range.

This way, you’ll be able to anticipate any takedown move and counter it.

Once you know to stay on your feet, it’s then time to do serious damage.

Your goal is to inflict damage with the best hand and leg combos that you know.

Utilize every opportunity to remind your opponent that your hands and feet have the ability to knock them out.

This will make them hesitant to close the distance and shoot for takedowns.

3. Know How to Defend Takedowns

When fighting with a BJJ master, it’s inevitable that you will find yourself having to defend against takedown attempts.

The most common are single and double leg takedowns.

The first rule is to stand at your opponent’s level.

If you’re taller than them, it means crouching until you’re on the same eye level.

Standing tall will be easier for them to crouch and shoot for your legs.

If that happens, the next step is to sprawl.

Sprawling requires you to shift your legs away from your opponent while moving your hands toward their head.

This immediately denies them the leverage needed to unbalance you and take you down.

A practical example of this is shifting your lead leg to the back when your opponent tries to attack.

If we lived in a perfect world, you would be able to defend all takedown attempts.

But it’s highly likely that you will find yourself on the ground against a BJJ fighter.

The first assignment is to relax.

Panic will escalate your heartbeat, causing you to tire more quickly than usual.

Once you’re relaxed, it gives you the opportunity to think clearly through any submission attempts that you will have to defend.

5. Remember This is a Street Fight

A street fight has no rules and this will play to your advantage.

Although violence isn’t encouraged, techniques such as finger breaking, groin shots, headbutts, and body bites will be necessary when your life is on the line.

As there won’t be any gloves involved, you’ll have free access to their fingers.

Target them to disengage any hold that your opponent is trying to establish.

Groin shots can be when your opponent attempts a takedown.

As they are rushing in, look for an opportunity to kick their groin.

If you’re in a clinch, look for opportunities for elbow shots.

Headbutts are also a brilliant option when you’re on the ground or in the clinch.

The safest way to headbutt is to position your head under your opponent’s chin and flick it up.

This will protect the weakest part of your head.

You can also headbutt their torso and ribs.

If all else fails, look to bite your opponent.

Your teeth are one of the strongest parts of your body and they should be used accordingly.

A bite in a sensitive part of their body such as their ears, nose or fingers, will do serious damage.

These 5 steps aren’t bullet-proof, but they will give you the best chance at beating a Brazilian Jiu-Jitsu practitioner.

How Can I Become an MMA Manager?

Which Professional Fighters Have Been/Are on Keto?