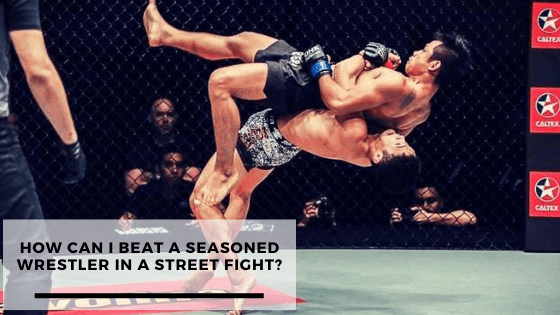 Wrestling is probably one of the best disciplines to control and takedown an opponent.

A skilled wrestler will be competent in avoiding strikes, closing the distance, and securing a takedown.

So how would you go about beating a seasoned wrestler in a street fight?

You can do a few things to give yourself a better chance of success.

Let’s dive into each of these points a little bit further.

1. Avoid Getting Into A Wrestling Match With Them If At All Possible

This one is pretty self-explanatory.

If you can stay on your feet and keep the fight where you want it, you’ll be in a much better position to win.

Use your long jabs and check kicks to keep the distance.

Furthermore, if you’re fast enough, you can go for legs kicks that will massively curtail the wrestler’s explosive takedowns.

Be wary, though, that once you throw a kick, the wrestler will try and grab on to it, so be quick to pull it back.

Another tactic you can use is to fake strikes and movements to make the wrestler try the takedown.

By faking your movements, you can entice the wrestler to shoot in, and then you can quickly move out of the way or counter with a strike.

However, there’ll always be times when you do end up on the ground. In those cases…

2. Always Be Ready To Sprawl When They Try To Shoot In For A Takedown

A ‘sprawl’ is a wrestling move used to defend against an opponent’s takedown attempt.

If you can execute a sprawl correctly, it will nullify their attempt and put you in a much better position on the ground.

The key to executing a sprawl is timing.

You need to wait until the wrestler is just about to shoot in for the takedown, and then quickly extend your legs and hips to stop their forward momentum.

Once you’ve stopped their momentum, you can either stay in the sprawl position and wait for them to tire themselves out or use the opportunity to take them down yourself.

3. Use Strikes From The Ground To Keep Them At A Distance And Back Them Off

If you can’t avoid getting taken down, then you need to be able to fight from the ground.

Just because you are taken down doesn’t mean you don’t have strikes at your arsenal.

One of your most powerful tools will be the up-kick.

An up-kick is a strike that is delivered when you are on your back with your feet in the air.

This can be an incredibly effective strike because it’s very difficult for your opponent to defend against.

The only real way to defend against it is to keep your distance, which will work to your advantage, as we talked about before.

4. Stay Mobile And Avoid Being Pinned Down

If you’re not mobile, the wrestler will be able to take you down and control you on the ground easily. This is why it’s so important to keep moving and stay light on your feet.

The best way to do this is to keep your hands low and use small, quick movements to avoid being pinned down.

You should also avoid staying in one spot for too long.

If the wrestler can’t predict where you’re going to be, it will be much more difficult for them to take you down.

5. Make Them Pay With Strikes And Submissions For Trying To Take You Down

There are plenty of ways to make the wrestler regret taking you down in the first place. One way is to use strikes as they are going for the shot.

You can also go for something nasty like putting your fingers in their eyes.

This is obviously illegal in most ring fights, but it’s still a possibility if you’re desperate.

Another way to make them pay is to go for submissions once you’re on the ground.

This can be very effective because the wrestler will likely be too focused on trying to take you down to defend against a submission attempt.

6. If All Else Fails, Use Whatever Weapon You Have Available To You

In a street fight, there are no rules.

This means that you can use whatever weapon you have available to you in order to defend yourself.

This could be anything from a bottle, chair, or knife.

Obviously, you should only use this as a last resort, but it’s still something to keep in mind.

Sum It All Up

A seasoned wrestler is a formidable foe, but there are still ways to beat them in a street fight.

The most important thing is to stay mobile and avoid being taken down.

However, if you can’t do that, then you need to be able to fight from the ground.

And finally, if all else fails, use whatever weapon you have available to you.

Does Bellator Test Its Fighters For PEDs?