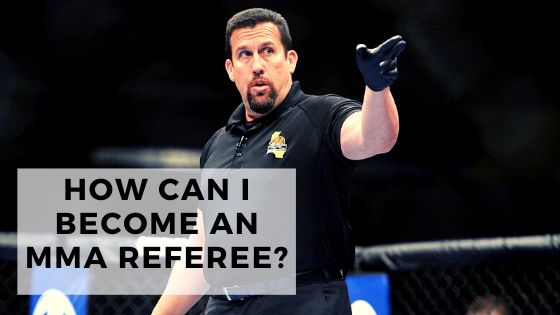 In order to become a professional MMA referee, there is a path that you need to follow. Here is a step-by-step guide on how you can become a referee.

Before you set your mind to become an MMA referee, you should know exactly what you are signing up for.

The job of the referee is simply to protect the fighters. During a match, the fighters could get pumped up and easily lose control.

This is where the referee’s actions are required. A referee should be capable of keeping the fight under control.

It is not as easy as the viewers may think, spotting low blows, eye gouges, and spotting a fighter who is grabbing the cage are all tough tasks.

How can I become an MMA referee?

The process to become an MMA referee in the US, is straightforward. You’d need a license to step into the octagon as a referee.

What are the skills that you need as a referee in MMA?

Becoming a referee is not an easy task. You need to develop an array of physical and mental skills to be good at it.

To become a referee you need to:

How to get licensed as a referee in the US?

In order to step into the octagon as a referee, you need to be licensed. In the US, 2 paths can lead you to your professional license to become a referee.

One of those paths takes you through a public commission.

In the US state commissions are authorized to hand out a license for a trained person to become an MMA referee. You would also receive a training course before you get your license.

The other way is to enroll in a private course. There are dozens of private courses that are available if you want to become a licensed MMA referee.

Public or private, which is better?

As mentioned, there are 2 paths you can take to become an MMA referee. Both are completely different. The answer to which of the above depends on what you are expecting to get.

A public course will last for several weeks. The process is a bit tedious and you would have to spectate quite a few matches as a ‘shadow referee’.

This simply means you are going to have to follow an official referee and learn from what he does.

A private course is much more brief and detailed. It is relatively easier to complete.

The main difference between a private and a public course comes in the form of the price tag. Buying a license from a public commission costs around $100. On the other hand, a private course will cost upwards of $1000.

How to be an MMA referee in the big organizations like the UFC?

Having a referee license alone will not get you near the big promotions. Even if you get your license from Herb Dean, Dana White is not going to call you the next day. You have to start climbing the ranks to reach a top-tier promotion.

You will get your opportunity at smaller regional events. With time and a good number of bouts refereed, you would start to earn a reputation. This will allow you to climb the ranks and make a name for yourself.

How Many MMA Promotions/Organizations the UFC has Bought?