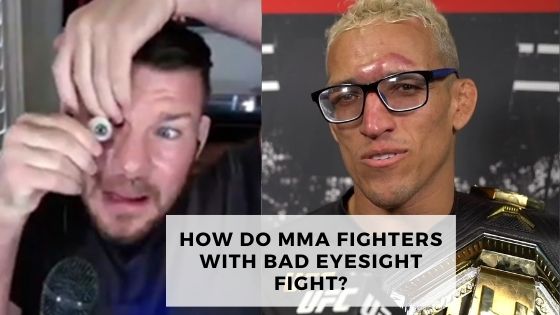 Wearing glasses during an MMA fight is obviously not an option, with the number of punches fighters take to the face in a single match.

Does this mean if you do not have 20/20 vision, you won’t be able to participate in MMA?

Actually, there are plenty of fighters who have an imperfect vision. They require corrective lenses and wear them while they engage in day-to-day activities.

Are glasses really necessary? It depends on how bad your vision is.

A near-sighted fighter often doesn’t need any aid when it comes to stepping into the cage. If it is not that big of a deal, if you can see a fist coming at you, you can manage without glasses.

For far-sighted fighters, vision could affect their performance. Fighting with impaired vision is a gamble. Absorbing that one punch thrown at you could be the difference between victory and defeat.

Charles Oliveira revealed in a podcast that he only sees 50% without his glasses, listen to him talk about his experience

Can MMA fighters wear contact lenses inside the cage?

Fighting with glasses is not an option. So the first alternative that comes to mind is to wear contact lenses. But is it a viable option?

MMA fighters do need to pass an eye test by the athletic commission. During the test, you cannot wear contacts.

Wearing contact lenses is a solution for bad vision but it has a lot of side effects.

You can easily get your contacts knocked off from a punch. Once your contact lenses drop to the mat, you cannot get down on all fours to find it.

Even if you find it miraculously, you cannot wear them since they are not sterile anymore.

Chances are you’ll get only one lens knocked off. This will leave you worse than before. With drastic differences in vision in both eyes, you will lack depth perception.

If this happens you will almost certainly get knocked out.

Unless you are blind or you cannot see the fighter in front of you, wearing contacts isn’t the best option. Most fighters manage with the vision they have inside the octagon.

Fighters wearing contacts during a match is rare. But some fighters wear contacts. Derek Brunson is one of those.

Michael Bisping won the UFC middleweight championship with only one eye, he once surprised the world when he took off his prosthetic eye in one of his podcasts

Listen to him telling his story on The Joe Rogan Experience