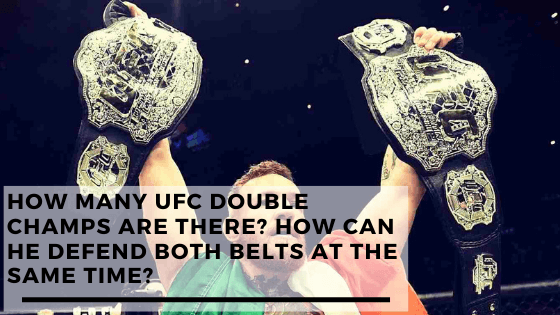 UFC Double champions (or champ champs as they are commonly called) are fighters who have held two world champion belts in different weight classes simultaneously.

How can a UFC double champion defend both belts without slowing down one division?

The UFC does not have specific rules in place that require a champion to defend their belt.

This lack of clear guidance has led to some dry spells when it comes to championship bouts, especially as they relate to champ champs.

If a prospective champ champ moves up a weight class to claim the second title, they stagnate the weight class that they currently hold the championship in.

Due to the fighter’s inability to make weight for their defense, other fighters are forced to wait an indeterminate amount of time for the fighter to either move back down a weight class to defend or wait for the UFC to strip the champion of their title to free it up for a new contender.

Historically, none of the three male champs has ever defended the lighter-weight title after they moved up a weight class and won.

While there is no hard and fast rule regarding defending championship belts as a champ champ.

If a fighter does not actively participate in the division and does not agree to defend their title, the UFC is within its rights to strip a fighter of the title.

This process is used as the UFC sees fit rather than after a certain amount of time has passed without defending.

So far, Amanda Nunes has defended both titles and seemingly bounced back and forth between weight classes.

As of 2021, Nunes no longer holds two championship belts, but still maintains her title as champion of the women’s featherweight division.

This was the one example of the UFC not being forced to strip a fighter of their previous title, as Nunes defended each time and only lost her belt after being defeated by Juliana Pena.

How many double champions are there in the UFC?

There have only been four double champions in UFC history.

How Can I Become an MMA Manager?