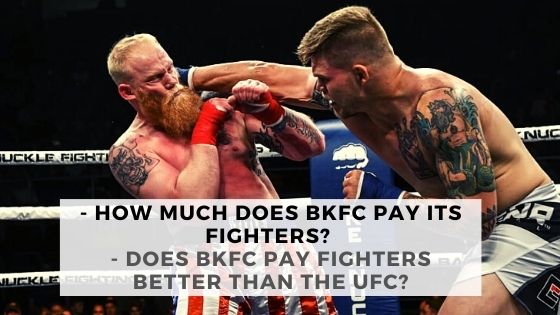 Fighting promotions are known to keep it hush when it comes to the matter of how much their fighters are getting paid.

Many fighters over the years have come out to speak on how their bout purses fall a long way short when taking into account how much they spend on training camp and other expenses, and considering how much danger the fighters themselves get to face.

Bare Knuckle Fighting Championship (BKFC) has managed to stand out in the matter of fighters’ salaries as it has been reported that fighters can earn up to $400,000 for a single appearance.

That’s much more than many fighters earn in a single fight in other big fighting promotions. Although you could argue that it is only deserving, bear in mind that Bare Knuckle Boxing presents more risk to the fighters than fighting with 4 or 8-ounce gloves.

On the low end, the compensation for BKFC fighters isn’t so high. With a take-home of $2500, the pay is comparable or slightly greater than what fighters in smaller promotions receive.

A few things should be considered, however, when discussing how much BKFC fighters are paid. Well-known fighters ( say those coming from a big promotion such as the UFC ) are going to be paid much higher than the less well-known fighters on the preliminary card.

BKFC president, Dave Feldman has said that the promotion has set up a pension scheme for its fighters which they can have access to upon their retirement from the sport. This can be counted as part of the financial benefits that BKFC fighters enjoy.

Does BKFC Pay Fighters Better than the UFC?

The UFC’s position as a multi-billion-dollar MMA promotion, and the largest promotion in the world for close to a decade, has not stopped it from getting its fair share of criticism over fighters’ salaries.

Former UFC fighters Paige VanZant and Jason Knight have reportedly said that they were getting paid more to fight in BKFC than in the UFC.

Remarkably, Paige VanZant is said to have earned $400,000 for her debut fight in BKFC, which is ten times what she earned in the UFC.

However, the top athletes in the UFC get paid even more than that, with Khabib Nurmagomedov making $6,090,000 from his fight with Justin Gaethje in 2020.

The reported average salary for a UFC fighter is around $147,865, and the least recorded payout for a fighter was put at $9,500.

In the BKFC on the other hand, the lowest payout for a fighter was around $2,500. Fighters in the UFC also have the chance of walking away with an extra $50,000 up to $150,000 in performance-related bonuses.

So all things considered, BKFC does not pay fighters better than the UFC as things stand.