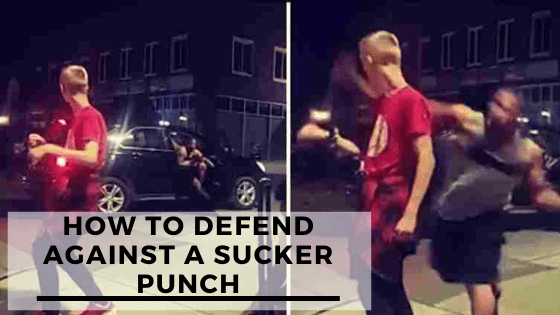 A sucker punch is basically an attack on a person from their blindside, without any warning.

It is culturally frowned upon in most societies and rightly referred to as a “coward punch”.

Sucker punches are extremely dangerous, because the brain is much more likely to violently shut down from such an unexpected impact.

This dirty tactic is mostly used by people who would like to inflict harm while avoiding confrontation.

It is a usual strategy for muggers to distract people, sucker-punch them, then take off with their valuables.

Numerous people have died from being on the receiving end of sucker punches.

Usually because they are knocked unconscious on impact, and fall uncontrolled on hard surfaces, in dangerous positions.

Most times it is the head slamming against concrete, or other hard edges that does the fatal damage.

New Zealand Mixed martial artist Fau Vakes died from his injuries after being sucker-punched on the streets.

A sucker punch is defined as being thrown when the victim is absolutely unaware.

This very definition makes it nearly impossible to defend against, as it is a matter of milliseconds.

So it is worth wondering how one can protect themselves against it.

Here are some tips that make it less likely for you to be caught with a sucker punch.

This means always taking account of what goes on in your environment.

It is the only right answer to the question of defending sucker punches.

By regularly assessing your surroundings, you can sense changes in your environment.

Hostile, conceited, or even unusual behavior.

Every other thing you can do stems from being aware of what goes on around you.

That awareness is what tells you to:

2. Put away your phone in public

It’s alarming how much attention most people give their phones when out and about.

With all your attention focused on your mobile phone, you’re lost to the world around you.

The same goes with using headphones or earbuds, the mere sound of a foot scuff behind you can set your reflexes into action.

You know the way you leave some spaces between your car and other cars, just in case.

You should do that with your body as well.

Practice being on alert when people get uncomfortably close to you.

Unless you’re in a packed crowd which means you probably should worry more about getting your pockets picked.

Steady balance will prevent you from easily getting knocked over, and also primes your body to react fluidly.

Practice and adopt standing with one foot behind the other.

Be it at the bus stop, the bar, or the urinal.

The ability to do this varies, depending on your life experience.

However, by watching people around you (not staring), you can actually recognize potential threats in their movements, body language, and behavior.

Imagine noticing that a person who was going in another direction seconds ago, is now walking closely behind you.

Your internal alarm bells will go off instantly, setting your adrenaline pumping.

It’s similar to how drivers learn to recognize if they’re being followed by another car.

6. Have someone to watch your back

When out drinking, hanging out in notorious neighborhoods, or going to expensive shopping, a good idea would be to have a friend along.

If at least one of you is mentally aware, it greatly reduces the chance of getting sucker punched.

You might still get jumped, but at least you’ll see it coming.

As mentioned before, a true sucker punch is one you don’t see coming.

The tips above are to ensure that you are more prepared and your senses always turned on to give you a better chance.

More so if you feel you have a reason to be expecting an attack.

Some people lead lives without the worry of being punched in the street, while some people have more reason to be on guard from attacks.

This can be a result of lifestyle, habits, neighborhood, etc. Regardless, you should always maintain a level of preparedness.