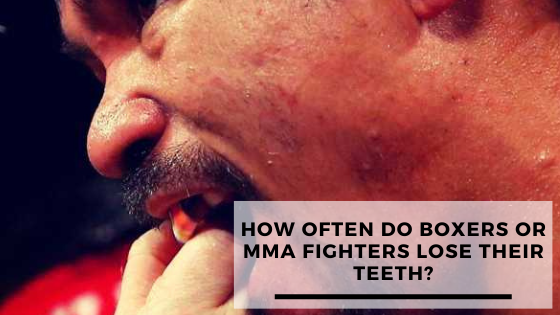 Teeth loss is a common occurrence in the world of contact sport, considering the allowance for all sorts of unpredictable collisions.

Sports like hockey, basketball, soccer, baseball and football all record injuries to the teeth from getting hit with the ball, puck, elbows, shoulders, or even feet.

Boxing and MMA on other hand, are based on techniques that range from punching, to kicking, knee and elbow striking, to grappling and body slams.

Unlike in other sports where the damage is accidental, these brutal, high-impact strikes are fully legal, and intentional.

The majority of them are aimed at an unprotected head.

As a result of this, facial injuries have become a by-product of indulging in these disciplines.

It is only normal then to assume that teeth loss and fractures are commonplace.

This usually leads one to wonder, how often do boxers and MMA fighters lose teeth?

The answer is, not very often.

Despite the concentrated volume of strikes absorbed to the head during a career of a professional fighter, losing teeth for them is not as common one would think.

Due to the modern advancements in dental technology, fighters can now fully protect their teeth using mouthguards.

These are shock absorbers that deflect most of the impact from the teeth and gums.

The occurrence of a professional fighter losing teeth in a fight is so few and far between, that it becomes a headline when it actually happens.

The last recorded time a high profile MMA fighter received severe damage to teeth was almost a year ago, when Devin Clark had four of his lower teeth smashed in by Ion Cutelaba.

The teeth weren’t completely knocked out though, hanging inward, loosely held by the gum. In boxing it’s been even far longer than that.

Let’s take a look at some professional fighters who have lost teeth in the ring (cage).

In a fight that became an instant classic, Degale and Badou went to a war that ended in majority draw.

Both men knocked each other down as the fight went back and forth up till the final bell.

In the final round, Jack landed a hook that sent Degale’s tooth flying as he reeled backwards and ended up on the canvas.

He was later seen trying to reinsert the teeth himself during the post fight interview.

Marquis Davis faced Antoine Douglas who was undefeated at the time, and lost by unanimous decision.

Late in round 6, a right hand from Douglas knocked Davis’s mouthguard to the floor.

On closer examination, it was revealed that his tooth had also gone with it.

Credit to Davis, he kicked it out of the ring and carried on fighting.

In a match up against Teixeira, Smith took a bad beating, which compelled the referee to finally step in, declaring a TKO in the final round.

Midway through round 4, with Teixeira mounted on his back and raining down blows, Smith was seen to be handing something over to the referee.

It turned out to be 2 of his teeth.

Smith later told his corner in between rounds, “My teeth are falling out”.

Their decision not to end the fight there and then drew criticisms from pundits, and fans alike.

Due to lack of sufficient recent occurrences, we have to go way back to 2011 to revisit the end of a legend.

The UFC Hall of Famer was ushered out of the sport by Lyoto Machida with a brutal front kick knockout.

Not only did this kick knock Couture unconscious, but in his post fight octagon interview, his tooth came off while he was speaking to Dana White, reiterating his need to call curtains on a long, tasking, but glorious career.

For the greater part of a decade, “Rumble Johnson” was renowned and revered as one of, if not the heaviest pound for pound hitter in the world of combat sports.

With seconds left in the 1st round of his WSOF fight with Arlovski, Rumble landed 2 knockdowns in quick succession, both from right hooks.

These punches broke Arlvoski’s jaw, and uprooted 2 of his lower teeth.

Though this injury was not a result of a strike, DC injured his teeth while completing a takedown in his mauling of Henderson.

He left the cage with the teeth still attached, but it was so badly damaged that he had to have it pulled.

Henderson had also lost a tooth during his wrestling days, showing that teeth losses are not peculiar to striking exchanges alone.

In his victory over Top Noi in 2019, Nakamura received a vicious left elbow that knocked out at least 2 of teeth.

Nakamura endured the injury  to win by unanimous decision.

Fighters are no strangers to losing teeth, but with the level of protection available in the form of elite defensive technique and ultra modern mouthguards, they do not lose teeth very often.

How to fix lost teeth?

Most cuts and fractures in fighting you can heal from, albeit leaving scars and side effects.

But the loss of a tooth is permanent damage.

Thankfully, a lost tooth can now be replaced with several medical procedures that look like, and can function almost the same as real teeth.

These options are dental implants, partial dentures and dental bridges Dan Henderson, Daniel Cormier, Andre Arlovski all use some variation of these replacements.

Active fighters prefer temporary solutions till the end of their careers before seeking a permanent fix.

An example is UFC fighter Pannie Kianzad, who is missing 2 front teeth which she likes to show off.

How do I avoid losing my teeth in a fight?

First, we would have to assume that this fight is a combat sport.

If that were the case, the answer is to invest in quality custom-made mouthguards that fit your mouth properly.

Some practitioners prefer to use two mouth guards for each set of teeth.

It is also advisable to use gloves and hand wraps for fighting.

Not only do gloves protect the hands, but it also creates a cushion, translating the force of the blow without the raw impact of the knuckle crashing against the teeth.

These measures go a long way guiding you through a fighting career with your teeth intact.

On the other hand, protecting your teeth in a streetfight is even more of an extreme sport.

The damage done to the teeth in a fight is usually a result of blunt impact from knuckles or kicks directly against the teeth.

The best defense is to completely avoid street fighting.

If you are unable to, the best is to keep your chin tucked in, making your mouth and jaw a smaller target.

It is impossible to plan for a street fight, they are too chaotic, random, and uncontrolled.

But the proper defensive technique will help you avoid getting hit to the head, with hands held high and head movement you stand a better chance of protecting your teeth.

Losing teeth in combat sports is not very common.

Losing teeth in streetfights is expected.

Why Don’t We See Navy SEALs In MMA If They Are As Good As Claimed?