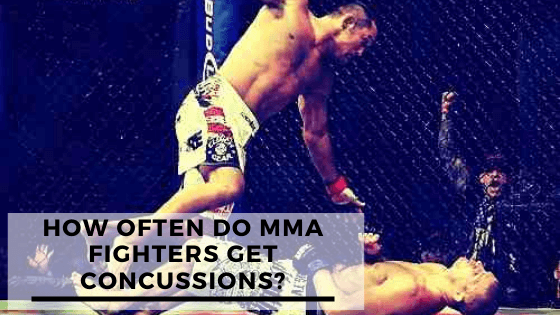 As an MMA fighter, one of your worst nightmares is being knocked out by your opponent in front of your fans.

It is common for a fighter to have a concussion after a knockout.

A concussion occurs when the brain is injured by a bump, blow, or hit.

Once you are hit, you lose consciousness and end up on the mat resulting in a TKO that ends the fight.

Today, we will be looking at concussions in the MMA world and the time frame you can expect to be out of commission.

Do MMA Fighters Get A Concussion After Every Fight?

MMA fighters do not get a concussion after every fight.

With that being said, research shows that around 25% of MMA fighters do sustain mild brain injuries in their careers.

Further research shows that an average of one concussion-like injury is present in 32% of all fights that occur.

How Long Does It Take To Recover From A Knockout?

Sometimes longer. This is the amount of time that a fighter will lose consciousness.

There is no exact time frame for how long it can take an MMA fighter to recover from a knockout. It will all depend on how severe the injury is.

Usually, around 80% of concussions tend to recover between seven-ten days.

Professionals will tell you that you should not return to MMA or any form of sports sooner than seven days after sustaining your injury.

What’s The Suspension Period Given By The Athletic Commission To A Fighter Who Gets Knocked Out?

This is a bit of a tricky question because the suspension will depend on how bad the concussion is.

If a fighter gets a concussion in the ring, the ringside physician will give the fighter a medical suspension.

How bad the injury is will depend on how long the suspension period will be.

A fighter can get anything from a thirty-day suspension to a six-month suspension.

If, however, an MMA fighter gets a concussion while training, it is up to the coach and the fighter to determine the next steps for the MMA fighter in question.

Even though a knockout is not the outcome that an MMA fighter wants, it is part of the job.

You must remember this is not a failure and does not mean it is the end of your career!

Take the time that you need to recover.

With physical therapy and rest, you can overcome the physical and emotional trauma caused by your knockout.

You can get back on your feet and do better next time.