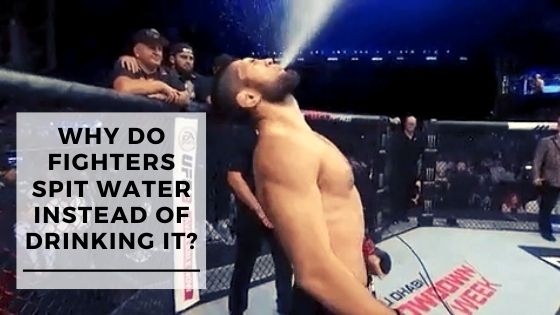 Fighters are usually seen to put water in their mouth, and instead of drinking, they spit it out.

This practice is common in Mixed Martial Arts and boxing. Probably because there are similarities to why they do it.

Most times, the act usually consists of the fighters drinking a little of the water they put in their mouth, then spitting the rest out. You need to drink without really swallowing it, in other words, cheat the thirst.

MMA fighters do this act during a fight for different reasons:

A reason fighters spit water is the need to wash blood caused by cuts in the fight. Swooshing around the mouth removes any blood in the mouth, impurities, mucous, etc.

Sometimes blood can also get in the back of the throat from a nose bleed. The gargling of the water, swooshing will help you spit it out instead of swallowing it.

Fighters often experience torn lips or broken teeth while competing. That is why some people hydrate and spit it out to clean the blood in the oral cavity.

Another reason why MMA fighters spit water is that their mouths can become really dry in the ring, and a lot of times they just want to get their mouth wet enough to be able to continue to the next round.

Fighters do swallow some water though, and spit the rest, just barely enough to keep being hydrated.

Your body does not have enough time to absorb plenty of water during a fight, so it is not going to rehydrate you. Why take the risk of drinking it and getting cramped up? All you need is to moisten and get the dryness out of your mouth.

Studies have also come up with a different reason. It has been shown that exercise increases the quantity of protein secreted into the saliva, especially a mucus called MUC5B. This mucus causes the saliva to get thicker, which makes it tougher to swallow, so we spit the water out.

A stomach full of food or water during a fight can seriously tamper your performance. It could make you have a little stomach ache or puke. Also, it makes you extra vulnerable to body strikes and vomiting.

In addition, sometimes fighters do this act of spitting water because it is some kind of tradition or a boost to their morale.