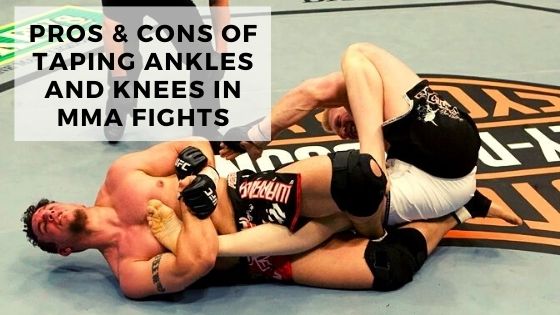 The dress code for mixed martial arts fighters is a pretty strict but basic one. There are some unique uniforms for specific martial arts such as Karate, Jiu-jitsu, Judo, and Taekwondo, where the fighters put on a specialized gi.

But in mixed martial arts according to the Unified Rules of MMA, fighters are instructed to stick to an MMA Uniform code that features the following items:

MMA fighters are not allowed to wear shoes or any padding on the feet, gi top or pants, or tight-fitting Speedo-style shorts.

They are also not allowed to tape or pad any parts of their upper body other than the hands.

There are no rules, however, against wrapping or taping the knees or ankles.

While some MMA promotions, such as the UFC may be stricter on the use of knee and ankle wraps and how they might influence fights, there is generally no unified prohibition on wrapping or taping the ankle for MMA fights.

Advantages of Taping/Wrapping the Ankles and Knees

In the case of ankle wraps, using them in MMA fights can provide the fighter with additional grip and traction on the ground to prevent slipping and falling.

Ankle or knee tapes/wraps provide support for the ankle or knee as it holds it in place and prevents exaggerated movements that could cause injuries. Fighters with bad or sprained ankles make use of tapes/wraps in fights to prevent further damage.

When ankle tapes are firmly or tightly done, they might aid a fighter’s kicking game, as the ankle does not flail around. Taping also prevents injuries that could occur when kicking.

Taping an ankle is essential reinforcing a joint that could be attacked with a submission hold. The ankle wouldn’t turn as easily when taped as it would if it wasn’t.

Disadvantages of Taping/Wrapping the Ankles or Knees

1. Getting caught easily in submissions

Taping/Wrapping the ankles and/or knees could also present a disadvantage for fighters trying to fight off a submission attempt. Under normal circumstances, sweating makes it harder for an opponent to grip the ankle or foot, but tapes or wraps serve as something to hold on to, and they provide better friction in submissions than normal slippery skin.

The type of material used to tape or wrap the ankle or knees may cause irritation for a fighter or his opponent.

The permitted material for ankle and knee wraps is a soft neoprene-type sleeve. In recent years, tapes of any kind are now being generally prohibited due to their proclivity to shed or unravel or cause irritation and other problems for a fighter or his opponent.

In MMA: Majority Draw Vs. Split Draw Vs. Technical Draw

How Often Do MMA Fighters Get Injured?