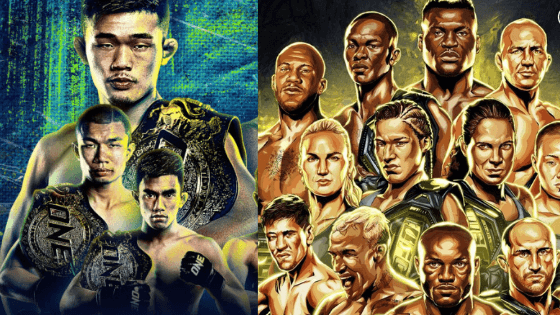 Common knowledge says UFC fighters are the absolute best in the world. Is this really true?

ONE Championship, the Asian MMA promotion, has added more than one fighter from the UFC roster. And, every single time, the UFC-turned ONE fighters lost in spectacular fashion.

Eddie Alvarez, who had won belts in both the UFC and Bellator MMA, was torched by Nastyukhin in his ONE debut in 2019.

Timofey Nastyukhin SHOCKS THE 🌏! The Russian warrior knocks out Eddie Alvarez at 4:05 of Round 1 to advance in the ONE Lightweight World Grand Prix! #WeAreONE #ANewEra #Tokyo #MartialArts pic.twitter.com/YxUV0TSnFR

Northcutt was a young striking sensation in the UFC at the time. Thirty seconds into the fight, Alexandre landed a vicious right hook, knocking out his opponent.

In April 2021, Demetrious Johnson, considered by many to be the greatest of all time in his division, was knocked out in the second round when he fought current ONE flyweight champion, Adriano Moraes.

Let’s be fair though. The same type of examples can be found the other way around.

Ben Askren remained ONE’s undefeated welterweight champion for five years. But when he switched to the UFC he lost back-to-back fights.

In one of his last bouts as a professional MMA fighter, Askren was brutally knocked out by Jorge Masvidal, only 5 seconds into the fight. Masvidal’s win against Askren is still the record for the UFC’s fastest KO.

Chatri Sityodtong, ONE Championship’s CEO, admitted that the margin for error at the highest level of competition is very small.

The promotion doesn’t really matter. It could happen to a UFC, Bellator or ONE Championship fighter. Any crossover could end in disaster.

Let’s hope we sometimes get to see an actual crossover between top fighters from ONE and the UFC. It would be a sight to see.