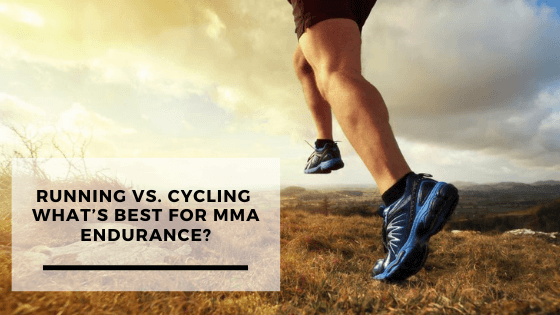 Endurance is one of the most important attributes for a professional MMA fighter to possess. Cardio, gas tank, or stamina, are also interchangeably used to refer to endurance in the world of mixed martial arts, but the technical definition of endurance is the physical ability of a fighter to fight at sustained levels of exertion, for a long period.

Several gifted fighters have struggled in fights despite starting impressively due to problems with their endurance.

Think of Shane Carwin versus Brock Lesnar at UFC 116 as a prime example.

This is why aside from striking, grappling, and movement training, endurance training is also a massive part of the fight preparation that MMA fighters go through.

But anaerobic exercises that increase breathing and heart rates such as running, swimming, rowing, biking, and jumping rope are also a good way to improve the endurance of a fighter.

All anaerobic exercises have specific and significant benefits that can improve the endurance of an MMA fighter but most fighters tend to opt for running or cycling/biking as their preferred endurance training exercise for different reasons.

Today we are going to discuss running and cycling for MMA endurance, and which one is the most beneficial.

Cycling is one of the go-to exercises for MMA fighters to build their endurance.

It is a low-impact cardiovascular workout that helps develop endurance without doing too much damage to your leg muscles and knees.

The activity of cycling (indoor or outdoor) involves making use of the muscles in the feet, calves, quadriceps, hamstrings, and glutes while pedaling, and the use of the arms and core while maintaining a good upper body posture.

The repeated contraction and extension of the lower body muscles involved helps to increase their strength, power, and speed.

Also, the upper body and core muscles that get worked while cycling gain an added strength over time that helps improve the stability and balance of the fighter, as well as the ability to generate more power and speed for striking.

The benefits of cycling for MMA endurance are:

Added leg strength allows the fighter to be able to continuously engage on the feet either in chasing/retreating or additional movements for long periods.

The core of a fighter is one of the most important parts of the body that need to be conditioned for endurance in MMA. It is critical to in efficient movement and translating power into the limbs during fighting.

Cycling to improve MMA endurance can be done without exerting too much strain on the body of a fighter. Connor McGregor has reportedly shared that he preferred cycling to running for building endurance because it was gentler on his knees.

It is a safe way to build endurance if you have any reservations about damaging your knees or shins.

The importance of running in mixed martial arts cannot be understated.

For many fighters, especially those with a foundation in Muay Thai, running is the primary exercise for improving endurance for other training activities and ultimately fighting.

“No run, no fight” is the popular saying.

Running is a rigorous workout that mostly targets the balls of the feet, calves, quads, glutes, hamstrings, and core muscles.

Running in variations such as rough terrain running, short interval sprints, and long distance running can help fighters maximize their stamina and cardiovascular conditioning, which in turn contribute to endurance.

The benefits of running are:

It is useful in creating a strong base fitness and stamina for fighters.

The increased strength and endurance of the lungs that comes from regular running allows for deeper and fuller breaths, which then lets more oxygen be taken into the lungs, and at a faster rate too.

More oxygen intake negates the lactic acid build-up in the muscles, so the fighter can recover from exertion more quickly.

Ultimately, both running and cycling are beneficial for building endurance in MMA.

Personal tendencies and preferences may influence what you think is better for you as an MMA fighter.

But if you have no problems with your knees then running should be your choice of aerobic exercise for building endurance.

It targets more muscles and places a heavier demand on the body so it toughens you up.

With enough variations and the right approach, running is a complete workout that greatly improves the endurance of an MMA fighter, much more than cycling does in our opinion.

Everything You Want To Know About MMA Cutmen

How Do Fighters Deal With Defeat In Front Of Crowds?

How to Get a Strong Chin in MMA & Boxing?