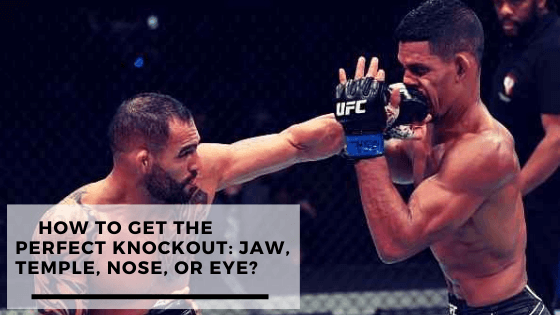 Whether you’re a professional, an aspiring combat sports athlete trying to improve your knockout ratio, or you’re just a regular person who wants to know how he/she can defend themselves better in a street fight.

Well, this article is for you.

On a side note, a lot of references made in this article shall be taken from the UFC and some other MMA promotions.

So let’s get right into it.

We shall analyze the effects of a punch or hit on the above parts of the body before arriving at an informed consensus on which is the most effective.

Given that the eye’s primary job is for sight, you can try to understand how effective a punch to the eye is, either in a street fight or in a professional fight.

We have seen cases of professional fights getting stopped because of inadvertent eye pokes, such is how sensitive and delicate the eye is.

Now, you should know that if what you’re looking for is a one-punch knockout, then a punch to the eye should not be your go-to option.

But if you’re looking to pile on punishment on an opponent before finally finishing him, then this is your best bet.

Just take a look at fighters like Tony Ferguson and Max Holloway who aren’t known for having genuine one-punch knockout power.

They have based their fighting styles on constant jabs, punches, and elbows to the eye. Not only does this impede a fighter’s vision, but it can literally suck the fight out of them.

Imagine being unable to breathe, with your eyes beginning to swell and blood running down the back of the throat into the mouth, sounds terrifying right?

Well, that’s what constant hits to the nose can cause in a fight.

Now, while hits to the nose are painful and can certainly cause more knockouts than hits to the eye, it shouldn’t be a priority when trying to knock someone out immediately.

This is because, regardless of the harm caused by it, knockouts through the nose hits are few and far between.

The only one that comes to mind is the Mauricio Rua and Dan Henderson fight in UFC fight night 38 in 2014 when a powerful right hand to the nose of Rua caused him to drop like a sack of potatoes.

A hit to the jaw is highly effective in knocking an opponent out, this is because it causes the brain to shift and shake inside the skull.

After the concussion, the brain goes into a state of rest, thereby causing the person to be temporarily unconscious.

A perfectly placed hit to the jaw is capable of sending any fighter to the “shadow realm” instantly.

The temple is one of the most delicate parts of the human head, it is often described as the latch that connects four skull bones; the frontal, parietal, temporal, and sphenoid.

This is what makes it so vulnerable, coupled with this, is the fact that there is a major cranial artery that runs underneath.

This is why temple injuries are the major determinants of severe brain injuries.

A perfectly timed shot to one’s temple can immediately shut a person’s light out, even without much power applied to it.

Take the fight between Edson Barboza and Shane Burgos for example. As they were trading punches, Barboza landed a right hook to the temple of Burgos.

For a couple of seconds, Burgos seemed to take the shot pretty well, but suddenly his legs gave out and he was sent crashing backwards into the cage.

This is an example of how fatal a shot to the temple can be.

For another example of how devastating a hit to the temple can be, you can look at Jiří Procházka’s knockout of Dominic Reyes.

Now, you might ask yourself, which place would cause the most damage among the four listed above.

Well, if you’re looking to gradually beat down your opponent, then constantly jabbing and striking at the eyes or nose is your best bet.

But if you’re looking for a quick one-punch knockout, then the chin or the temple is what you should aim for.

So that’s where we leave it for today, but you should also know that apart from the parts of the body listed above, hits to some other parts can cause maximum damage to someone.

The kidney is a good example, and the throat or neck, in street fights or situations of self-defense.

Does A Gain In Weight Mean A Better Chin?

How Often Do MMA Fighters Spar In a Week?

Does ONE FC Test Its Fighters For Steroids & Other PEDs?