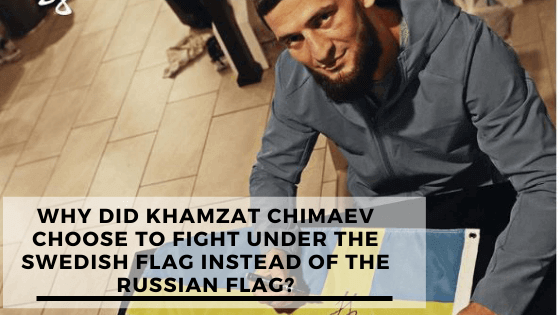 Khamzat Chimaev, a rising star in the UFC’s welterweight and middleweight divisions, was born in the Russian village of Gvardeyskoe.

But he and his family had to relocate to Sweden in 2013, where he began training in mixed martial arts and freestyle wrestling.

Sweden, like the other Nordic countries, allows people to have two naionalities.

You can apply for Swedish citizenship and keep your other citizenship.

This is most likely a blessing in disguise for Chimaev, given the sanctions imposed on Russian athletes and the difficulty in obtaining a visa for the country.

Khamzat says he enjoys living in Sweden, so when the time came to decide which country he should represent upon entering the Octagon, he had no hesitations about choosing Sweden.

In an interview with ESPN MMA’s Brett Okamoto, Chimaev discussed his old desire to move to Sweden when he was in Russia, and the following is what he said:

“My brother was living here. He told us to come here, it’s good for us.

And our one brother has like surgery as well. So that helps him like when we come directly.

After that we stay here, we like it and they help us a lot as well.”

In another interview, Chimaev stated:

“If you want to live your life here, no one will put a spoke in your wheels.

Everyone lives the same, earns money, no one is hungry, and everything is ok. I feel very comfortable here.

For example, the difference in salary between a street sweeper and an office manager is not that big.

In Sweden, everyone is on almost the same level of living”.

Ultimately, in search of better sports facilities, Chechen-born Khamzat had to move to Sweden.

He said this while talking to Hustle MMA.

What is The Prime Age Of An MMA Fighter?