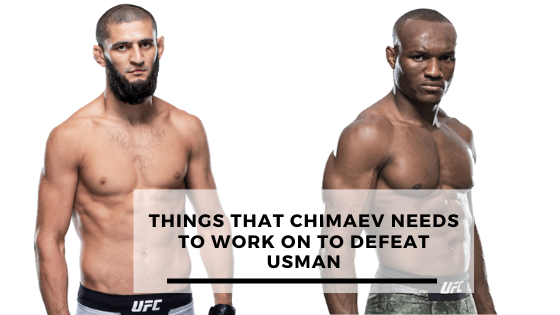 Every once in a while in the world of MMA and the UFC, a fighter breaks into the scene and just seems to take the MMA world by storm.

The hype and potential such fighter carries comes with an inevitability, that one day, they’ll eventually become champion. We saw it in Conor McGregor, Khabib Nurmagomedov, Jon Jones and more recently in Israel Adesanya, and now, we are seeing it in a genuine welterweight contender in khamzat “borz” chimaev.

While there have been many fighters in the past that have failed to capitalise on such talent and enormous hype trains, you can’t deny that there is something different and special about “the wolf”.

His first four fights in the UFC showed a sense of invisibility and sheer dominance, like no one else in UFC history.

In the four fights, he absorbed only one significant strike, but as previous greats before him encountered, there is always that one fight, that properly tests what they’re made of; Conor found that out with Chad Mendez, Israel encountered Kelvin Gastelum, and with Khamzat, it was Gilbert “Durinho” Burns.

The fight was a real eye opener for everyone, including khamzat himself; prior to the fight, he had spent really limited time in the octagon, so it was really difficult to come up with factual strengths and weaknesses, but now that it’s done, we can argue to some level of certainty the strengths and weaknesses of khamzat, and what he needs to do and work on in order to one day, defeat the welterweight champion; Kamaru Usman

This aspect of khamzat had already been examined before the Burns fight but there were some new layers that were uncovered in the fight.

Primarily an orthodox fighter, khamzat showed that he can comfortably switch stances and fight from either side without compromising his power or technique. This is shown by the southpaw jab with this right hand which sent Burns straight to the canvas.

You will hardly see a UFC champion without a great chin, and khamzat seems to be following in that line. Gilbert is one of the hardest hitters in the 170-pound division, he even knocked down Usman in the first round of their fight, and khamzat ate a lot of this right overhands, most times without even flinching.

Although he was hurt a couple of times, the chin on khamzat is clearly something to behold.

If you didn’t know this before the burns fight, then you certainly do now.

You don’t just drop a fighter like Gilbert burns with a southpaw jab unless you carry some serious knockout power, although he couldn’t finish him, Burns was definitely hurt bad in the fight.

Now, while we could go on and on about his strengths, I’m pretty sure that’s not what you are here for.

Yes, khamzat is ridiculously strong and powerful, has a phenomenal chin and his offensive striking is improving massively, but is it enough to usurp Kamaru Usman?

Well, following the Burns fight and some of the weaknesses that will be exposed here, the answer is most likely No.

Following this, let’s take a look at some of Khamzat’s weaknesses that were exposed against burns and what he can work on to defeat Usman.

A popular theme throughout the fight with Gilbert Burns was that chimaev’s head movement is non-existent.

He tries to maintain a high guard with his left hand, while using his right to parry punches, but this was exposed a lot.

He might have a solid chin, but he doesn’t want to depend on it too much, and if he doesn’t improve on it against Usman, he would get picked apart.

While brawling might not necessarily be a bad idea in a fight, if you do it too often, your chin will be exposed, and from evidence in the Burns fight, Chimaev is not very good at brawling either.

He comes forward and throws wild shots, whilst leaving his chin out in the air; this was what led to Gilbert catching him with a right hook twice late in round 2 and knocking him down.

When he fights technical, like in the 3rd round, he had a lot of success, fighting behind his jab and not overcommitting on any of his strikes, he’ll need to do more of it if he hopes to defeat Usman.

Khamzat had no form of defense whatsoever for incoming leg kicks from Durinho; he didn’t check any, nor did he try to catch and set up takedowns, he just simply ate them.

It’s something he’ll need to work on before taking on the champ.

Now, why it’s difficult to judge a person’s emotional state in a fight, with Khamzat, it was pretty obvious. Throughout fight week, up until he literally ran up to the octagon, you could clearly see he was obviously emotional.

Against a calm and seasoned veteran like Kamaru Usman, fighting emotional will only lead to you making mistakes and getting beat.

This point might anger a lot of khamzat fans reading this, based on the popular notion that khamzat doesn’t tire, but looking back at his fight with Burns, this is completely false.

In the 2nd round of the fight, Gilbert looked the far fresher fighter, while Khamzat had slowed down considerably from the 1st  round, though he managed to catch a second wind to finish the fight strongly, if he truly wants to beat Usman, he’ll need to pace himself better over 5 rounds; because one thing we know for sure is that Kamaru Usmam will not get tired.

So that’s where we leave it for now.

Khamzat is a highly skilled fighter with immense heart based on his showing against Burns, but against the Pound for pound number 1 fighter in the world, he has a lot of work to do to beat him.

If he can correct all of his weaknesses as shown above, then he definitely has a solid chance of becoming a champion one day.