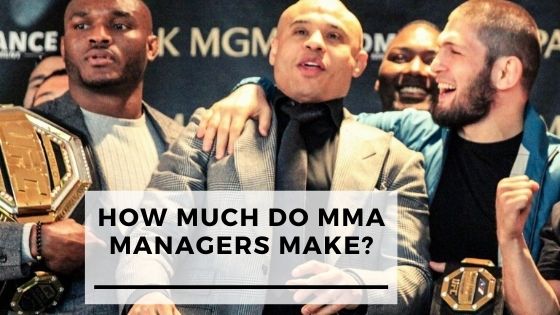 In a fighter’s MMA career, the manager plays a huge role. Find a good manager, and he’ll sign you up with an elite promotion, get you noticed, get you good fights, and if you have the skill he could propel your career to be the main event fighter.

With the importance of a manager’s role, you can’t help but wonder how much do managers make? And who pays them?

While the fighters’ salaries are monitored by a lot of people, the money that the manager makes is often overlooked. A lot of people do not know who pays the manager or how does he get his paycheck.

So, how much do managers charge? In MMA a standard manager can charge anywhere from 5% to 20% and some charge even higher.

When talking about managers there are a few names that come to mind:

When you are looking at high-caliber managers like these with a lot of connections, they charge around 20% of the fighter’s purse.

There are some managers that will work for about 5% of the fighter’s purse, but their services will be limited.

Why do MMA fighters have to invest in a high-caliber manager?

A manager brings a lot to the table. He negotiates contracts that will bring you the most possible amount of money. But there are many more reasons why fighters should invest in a good manager.

If you are an amateur fighter looking to make it to the big leagues, you need a good manager with a lot of connections to sign you into an elite promotion.

A good manager will definitely get your money back by bringing sponsors.

Managers are in charge of contacting companies and convincing them to endorse a fighter. Even after they take a cut from your sponsorship, you are still left with a decent sum.

Ultimately if a manager is in charge of multiple fighters, chances are he makes more than the fighters he represents.