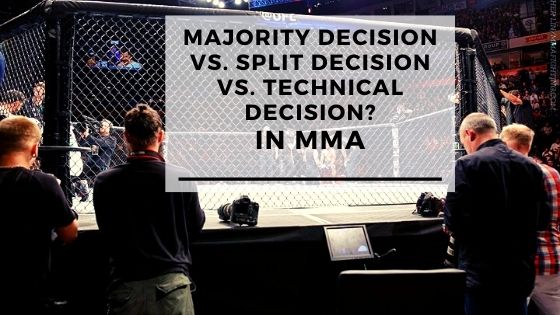 What is a majority decision in MMA?

A majority decision is one where two out of three judges score the contest in favor of one fighter, but the third one scores it a draw.

The most notable example of a fight ending in a majority decision is probably the second Nate Diaz-Connor McGregor fight.

What is a split decision in MMA?

A split decision happens when two judges score in favor of one fighter, while the third judge decides that the opposite fighter should be declared the winner.

Because of the close-call nature of these bouts, these decisions tend to be controversial.

In 2013, Georges St-Pierre, Welterweight Champion at the time, faced Johny Hendricks, the #1 contender of the division.

GSP dominated the beginning of the fight but was severely hurt and dominated by his opponent. Even though Hendricks landed more significant strikes, he was declared the loser. GSP won via split decision and kept his belt in face of widespread criticism.

Recently, many fans have argued that Max Holloway won his second encounter against the current featherweight champion, but the judges saw it otherwise and awarded Volkanovski a split decision win.

What is a technical decision in MMA?

A technical decision occurs when a fight is stopped after a fighter sustains any type of injury that prevents them to continue.

A typical example of this in the MMA world is accidental eye-pokes. In this case, if a referee considers a fighter can’t see, then the fight is over, and the judge’s scorecards decide the winner.

Back in 2013, during the third round of their bout, Michael Bisping accidentally poked his opponent, Alan Belcher, in the eye.

Herb Dean, the referee, was forced to put a stop to the fight. Bisping, who had dominated the fight leading up to that point, was awarded the win.