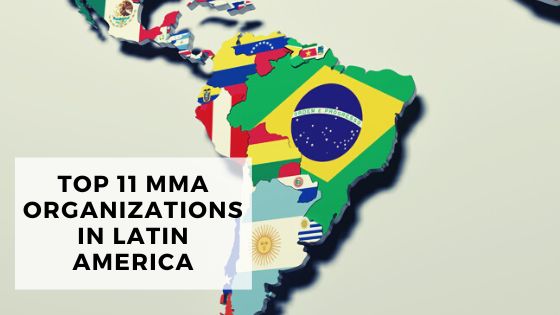 In the UFC, Hispanic and Brazilian fighters are among the top 10 fighters in almost every division. Often these fighters have a Latin American promotion that acts as the foundation for their career.

Here are the best MMA organizations in Latin America.

Combate Americas was recently renamed Combate Global in a rebranding attempt. This promotion is based in Mexico and started in 2013.

Since then it has held over 83 events. With the rebranding, in 2021 all events were held in Miami, Florida.

Shooto is an organization that started in 1985 in Japan. From there they spread throughout many parts of the globe, and one of their branches is Shooto Brazil. Shooto Brazil staged its first event in Rio De Janerio in May 2002.

Shooto Brazil is one of the best promotions in Latin America. It acts as a feeder organization to the UFC. The promotion has a solid lightweight division, but ultimately the best fighters end up in the UFC.

Shooto or a similar sport called Vale Tudo, has been around in Brazil for almost a century. This is derived as MMA in modern Brazil.

Ultimate Warrior Challenge is a promotion based in Mexico. It started in 2009.

The promotion had a decent start until 2015. From 2015 to 2019 they did not organize any events. But they have sprung back on track since.

Mexico has had some great fighters over the years. More often than not, those fighters went through one of the smaller promotions in Mexico or Latin America. Some of the best to come out of Mexico are Yair Rodriguez, current UFC Fly Weight champion Brandon Moreno, Alexa Grasso, Cain Velasquez, Anthony Pettis, and many more.

Lux Fight League is a promotion that hails from Mexico. The promotion held its first event in 2017.

The promotion has had 19 events to date and 8 of those events were held in 2021. Events were hosted in numerous cities spread out through Mexico. This is one of the best MMA promotions in Mexico.

This is another promotion to initiate in Mexico. Naciones MMA is a fairly new promotion. It only has 2 events under its banner with 1 more scheduled in early 2022. The first event was held on the 19th of March 2021 in Monterrey, Mexico.

Jungle Fight is a promotion based in Brazil. It originated in 2003. The organization was created by a pioneering MMA fighter and Jiu-Jitsu black belt, Wallid Ismail.

Along with Shooto Brazil, this is also another feeder organization to the UFC. This is considered the best promotion in South American MMA.

Thunder Fight is another promotion that is based in Sao Paulo, Brazil. The promotion started in 2014.

This is one of the few promotions that are still running strong in Brazil. Thunder Fight had more than 20 events in 2021.

Arena Global is one of the youngest MMA promotions in Latin America. This is based in Rio De Janerio Brazil and started in 2019.

The promotion has held 15 events to date. All the events were organized in Rio De Janerio.

Another young MMA promotion to originate in Brazil is the Future Fighting Championship. FFC held its first event in 2019.

Even though the promotion had a good start, it has been rocky lately. Unlike Arena Globel, which had its best year in 2021, FFC had its worst with only 4 events in 2021.

Brazil is home to some of the best fighters who represent the sport of MMA right now. Some of those names include Vitor Belfort, Cris Cyborg, Junior Dos Santos, Jose Aldo, and the GOATS, Anderson Silva and Amanda Nunes.

Brazil’s tie with Vale Tudo, which is a brutal form of MMA is one of the reasons the nation has created so many celebrities in the sport. Some of those Vale Tudo ties are seen in the tons of regional MMA promotions in Brazil.

Fusion Fighting Championship which is based in Peru is one of the consistent MMA promotions in entire Latin America.

With its first event in October 2014, it has held 48 events to date. You rarely see a promotion with so many events under their banner in Latin America. The promotion has also set foot n foreign soil.

Originated in 2018, Comabate Bolivia MMA, hasn’t found a lot of success. Despite being the only MMA promotion in Bolivia, it is still far behind a lot of promotions in Latin America.

This promotion has only held 5 events with a recent event in 2021.