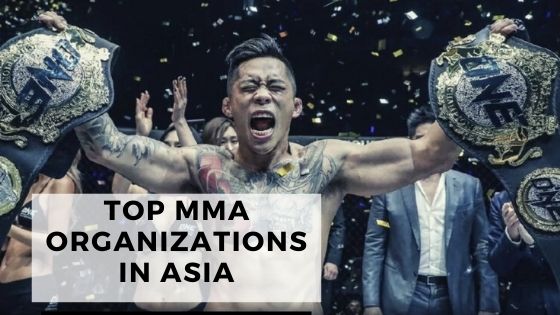 Ever since Pride Fighting Championship was bought by the UFC, there weren’t a lot of reputable MMA promotions in Asia.

Pride FC was the biggest promotion at the time, but with new promotions popping up from every corner in the largest continent, MMA in Asia might be stronger than ever before. Currently, there are many impressive MMA promotions in Asia.

Here are the top MMA promotions in Asia.

One Fighting Championship has become a global sensation in the 21st century. It has cemented its name among the top MMA promotions in the world. Currently, this is the largest promotion in Asia, due to its scale.

The promotion is based in Singapore but has held events in many different cities spanning numerous countries.

The company draws a lot of revenue through domestic TV deals as well as a 10-year partnership with FOX Sports Asia.

The promotion has been on air since 2011. One Fighting Championship is often admired due to its weight cut policy. Cutting weight via dehydration is banned in this promotion.

Deep has been around for over two decades. This is not exactly considered a top-tier organization, as it is considered more of a feeder organization. Deep is known for building fighters and transferring them to other Japanese promotions.

Rizin FF is a relatively new promotion in the Asian MMA circuit. It has lasted 7 years as of 2022.

Even though Rizin is a new promotion, it has had some highlights. Its biggest event has been bigger than other UFC events.

Pancrase is another promotion that hails from Japan and has been around since 1993. Pancrase is as old as the UFC.

This is the best regional promotion in Japan. While other promotions like Rizin and One Championship are focused on taking their global promotion, Pancrase is set on solidifying its ranks in Japan.

Pancrase is praised for its unique set of rules compared to other MMA promotions. But the same set of rules is criticized since it resembles wrestling.

One of the highlights of this promotion was signing a deal with the UFC to be streamed live and exclusively on UFC fight pass. All Pancrase fights are also available on a video-on-demand basis.

Another veteran in the MMA circuit in Asia would be Shooto. it has been around since 1985.

Being a 36-year-old MMA promotion makes it the oldest MMA promotion in the world. This one too was originated in Japan. This is one of the rarest Asian promotions that step foot out of Asia.

The list of stars to come out of this company is lengthy. One of the best in the sport of MMA, Anderson Silva also started his career in Shooto.

Road Fighting Championship is a South Korean-based promotion that started 11 years ago in 2010.

This is one of the biggest promotions in Asia, it held events in China and Japan.

Road FC events are watched in over 50 countries and broadcast on over a dozen TV channels and internet platforms.

Ever since Spirit MC closed down, this is the largest promotion in South Korea. Road Fighting Championship has held over 80 events to date.

AMC Fight Nights was known as Fight Nights Global. This is one of the largest promotions in the sport, it has hosted K-1 and other martial arts events.

AMC Fight Nights was founded in Russia in 2010. Its roster contains some of the top-ranked fighters in the world.

Since 2010, the promotion has held 100 plus events spreading through different cities in Russia.

This is another promotion that hails from Russia that started in 2014. ACA matches are available to stream on YouTube and Facebook.