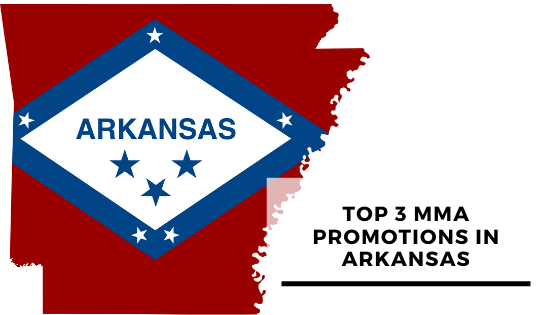 Do you want to know about the best MMA promotions in Arkansas?

Look no further!! Here are some of the best in the state based on popularity and reach.

Many of these promoters have regular fights around different parts of Arkansas for everyone to enjoy life, or on Pay Per View.

Here are the top 4 promotions in Arkansas:

Peak Fighting offers premium live MMA events for everyone to enjoy, and if you can’t make it to the venue then their Pay Per View option is available as well.

They were founded in 2018 by Craig Campbell who is both owner/coach at Texarkana Combat Sports as well as the owner of Peak Fighting.

Their goal is to showcase both professionals and local homegrown talent from Texarkana and nearby areas.

Many of their fights may also feature new up-and-coming fighters, which motivates others to compete in this sport.

Now, they have events for MMA, boxing, and kickboxing alike. They quickly grew, and are the main promoter in the area.

On the main website for NWFA, you can even join their email list to be the first to know about future fights.

NWFA is a promotion that represents both professionals and amateurs in their fights. They are located in the city of Bentonville, Arkansas.

They like to promote and advertise their fighters in almost every post, which can help fans and fighters build a stronger connection with each other.

This helps create brand awareness, but also the awareness in their community for all fighters, new and veterans.

MMA Xtreme Fighting Championships offer not only MMA but kickboxing, Jiu-Jitsu, and boxing for local/regional professionals, amateurs, and youth as well.

They are based in Fort Smith, Arkansas, and River Valley area. They are one of the top sources of entertainment for combat fighting in that area.

Brian Foster, a world-class MMA fighter who competed in the UFC, is one of the main organizers for the fights held in Fort Smith.

MMA Xtreme has started a YouTube channel and gives fans the chance to experience the event with full commentary and highlights of the fights and show the winner winning their belts.