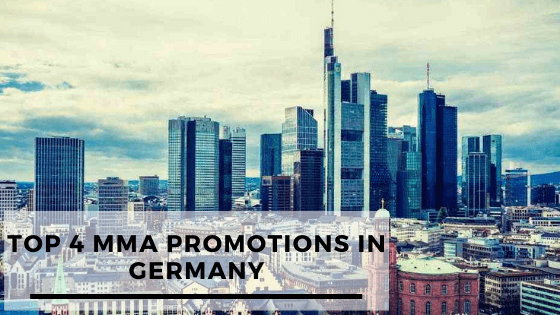 Here is a list of the 4 best MMA promotions in Germany:

GMC stands for German MMA Championships and was founded in 2009 by H&A Event Management GmbH. The headquarters are in Herne, North Rhine-Westphalia, Germany.

The CEOs are MMA enthusiasts Özhan Altintas, Deniz Haciabdurrahmanoglu, Kayhan Altintas. They have built a platform similar to UFC and are the most popular on social media.

Since its first event in 2010, German MMA Championship has held 40 events and over 414 matches thus far.

They have nine different weight classes and are a professional sports league.

There is a GMC Fight Pass available online with different subscription packages.

EMC’s headquarters are in Dusseldorf, Germany and many of its events take place there.

So far, Elite MMA Championship has held 8 events and at least 66 matches.

They are also a professional sports league and have signed many former UFC fighters (and other popular promotions).

EMC is relatively new and claims to be the fastest-growing MMA promotion in both Germany and Europe.

They promote young fighters as well as domestic talent.

The first event held by National Fighting Championships took place in late 2019 at the NFT gym. It was held in the same city as their headquarters in Krefeld.

So far, NFC has held more than 12 events and at least 85 matches.

They have also started setting up fights with international fighters as well.

NFC broadcasts every live event with their partners at fighting.de.

NFC is also streamed by Fighting on YouTube and on TV, you can find them on channel Sport 1.

GPC had its first event in September 2020. It is run along with GEMMAF (German Mixed Martial Arts Federation) whose goal is to make MMA a recognized sport internationally and in the Olympics.

As of today, German Cage Pioneer has held 4 events and has had at least 35 matches.

They like to have a domestic talent search, before hiring from other promotions.

GPC also promotes fights from the amateur level to the elite level.

Fight24.tv broadcasts GPC fights either for free or with a Fight Pass for live streaming.