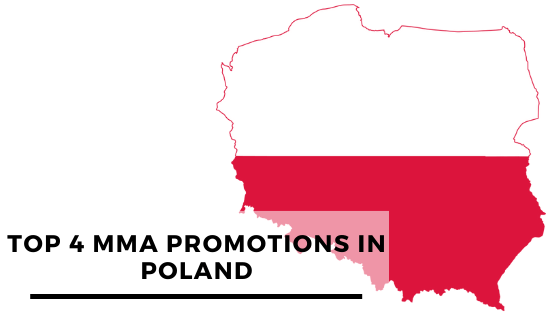 Fame MMA was started in May 2018 by a few different people, but the CEO and co-owner Wojciech Gola has played the biggest role.

Their headquarters are in Lodz, but events are held in various Polish cities. They feature both professional and amateur fights.

Fame MMA has its own broadcasting website (famemma.tv) where you can buy a subscription and download their app on a mobile device to stream anywhere.

Fame MMA provides a live stream on YouTube as well as free fights and highlights on their official channel: Fame MMA

Konfrontacja Sztuk Walki is a privately-owned promotion that was founded in 2004 in Warsaw, Poland, by Maciej Kawulski and Martin Lewandowski.

Thus far, KSW has held 74 events with over 630 matches with many more in the future.

They have many different weight classes that feature both men’s and women’s fights.

KSW is commonly believed to be Poland’s premier MMA promotion.

Their events are huge, and hold records for large attendances in Europe MMA events.

KSW runs its show nationally live on the Polsat television network (free to air). It also runs on Polsat Sport and Polsat Sport Extra throughout Europe.

The founders of FEN are Paweł Jóźwiak, Rafał Sawicki, Kamil Birka, Bartosz Szuba and Łukasz Paluch. Their headquarters are in Wroclaw, Poland.

The FEN Federation is one of the largest MMA and K-1 (kickboxing) organizers in Poland.

They have Pay Per View options and broadcasting on Polsat Sport and Super Polsat open channels.

CFN began in 2018 and was initiated by the Contender Kamienna Gora Club.

So far, they have had 6 events with 27 matches.

You can find videos on their YouTube channel: Contender Fight Night