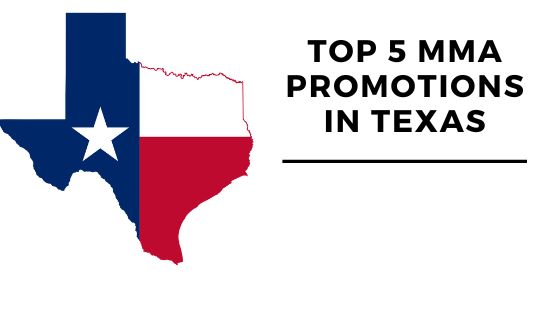 In this article, you will find the top 5 MMA organizations in the state of Texas.

Widely regarded as the top MMA promotion in Texas. The MMA & Muay Thai promotion has grown exponentially over the past few years.

Located in Arlington, Texas, Xtreme Knockout has live events with a mixture of professional and amateur fights, the promotion holds several events annually.

Legacy Fighting Alliance is an MMA promotion based in Houston, Texas. It was founded by Ed Soares in 2017.

The move was made to create a single umbrella where fighters from both promotions can compete, but after a stop-start run, the RFA (Resurrection Fighting Alliance) saw the light by merging both promotions.

The first event of the newly merged promotion took place on the 13th of January, 2017 with a title unification fight that was scheduled as the main event.

The promotion has been active since 2013 and hosts over 7 events annually.

Elite Fight Promotion is more specialized in boxing than in MMA, but it still holds a good amount of MMA in its events.