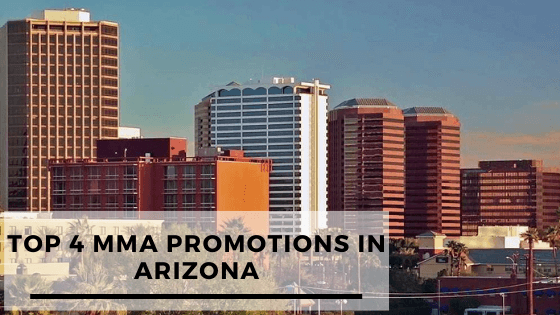 Below, you will find the best 4 MMA promotions in Arizona.

Coming in at number 1, we have RUF MMA which is based in the state capital of Phoenix.

They have 4600 followers on Instagram and regularly post videos, pictures, and highlights for viewers to see.They have fights every other month or so.

The fights occur in the famous ‘Celebrity Theatre’ which has a rich history in Phoenix and is definitely a sight to see.

World Fighting Federation is an elite MMA promotion company that has been running in Arizona and across the West for many years.

They have about 3200 followers on Instagram and like to showcase their fighters in action and in victory alike.

The fighting is often held either at the Findlay Toyota Center (Prescott Valley), Celebrity Theatre (Tucson), but most past events have been at the Wild Horse Pass Hotel and Casino (Chandler).

3. Rise of the Prospects: Cage Series

This promotion brings local fights to the city of Tucson, Arizona.

They have around 3000 loyal followers on Instagram and love promoting the fighters that were involved in the bouts.

These cage matches have gotten the city excited and are planning to hold another event this upcoming July 2022!!

LFA is unique in the sense that it not only covers Arizona fights but does involve southern California as well.