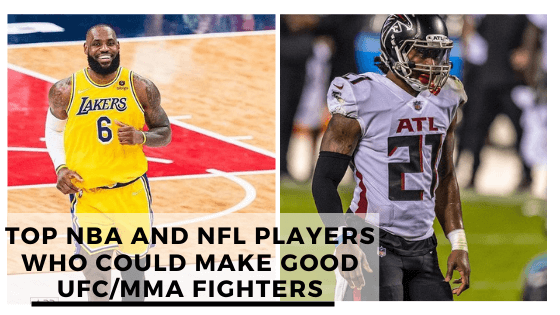 Sports fans around the world have always wondered how their favorite sportsperson would perform in another sport such as MMA because one-on-one combat brings out the true personality and potential of a sportsperson.

Since no team member is there to help that athlete, he can only rely upon his abilities to perform, and whether he wins or loses, the credit or blame is 100% upon him. Let’s talk about a few NBA and NFL players who could be just as great in the fight game of MMA/UFC as they are in the NBA and NFL.

James Johnson has been in the NBA for the past 13 years, but prior to getting into the NBA.

Johnson was known to be a fierce MMA fighter, and he had a 20-0 kickboxing record and had seven MMA fights under his belt.

Johnson also has a second-degree black belt in martial arts, and at the tender age of 18.

He had his first MMA match, and he defeated his opponent in just 1 minute and 37 seconds.

Lebron James is one of the living legends of the NBA who also happens to be playing currently.

Lebron is a gifted individual, and with the kind of stature and strength he has, he would absolutely annihilate any opponent in one-to-one combat.

MMA fighters are lucky that there is a lot of money in the NBA.

That’s why they don’t need to be worried about facing Lebron, but if Lebron was there in MMA or UFC, he would have been a formidable fighter.

Dwight Howard, in the past, has shown an interest in MMA and, in one public statement, he said he would fight in the UFC one day for $10 million.

Dwight is 6’11 tall and, with his height, reach, and interest, he could prove to be a good MMA or UFC fighter.

Antonio Brown is a machine when it comes to working out.

He doesn’t appear to take any days off. It’s not surprising that he recently called himself “The New Hulk” in an extremely chiseled photo.

If he decides to step his foot into MMA or UFC, he is going to be unstoppable, and his shorter frame will allow him to step into the ring with more muscle and weight.

Which could prove to be a great advantage for him.

Todd Gurley was declared the most offensive player a few years back.

When it comes to the game, Gurley is an absolute animal.

His aggression and dominance, coupled with training, if properly channeled, could turn him into a great MMA/UFC fighter.

When Watt hits the field, he is like a warrior in action.

Quarterbacks are wise to fear this 295-pound beast.

It’s no surprise he has been named defensive player of the year multiple times.

If he seriously considers MMA or UFC as a career option, then he is going to break a lot of bones, no matter how tough the opponent is, because of the kind of attitude he brings, that is of a true warrior.