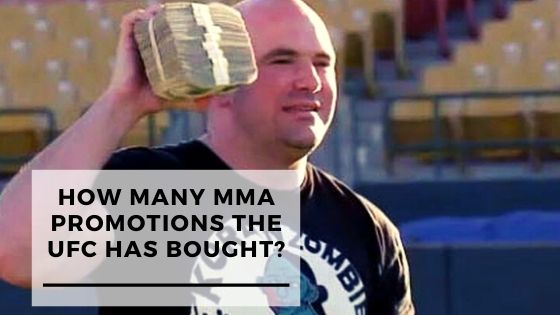 The UFC is by far the biggest mixed martial arts promotion in the world today. The Las Vegas-based corporation has come a long way from when it was founded in 1993 to be the leading authority in MMA television production in recent years, under the operation of its parent company Zuffa, LLC.

Only one other promotion acts as a direct rival to the UFC’s current dominance of the market, and that’s ONE Championship. And even they offer little competition to what can now be termed a UFC monopoly over the MMA promotions business.

This one-horse race had not always been the case, however. Over the last decade, the UFC, under Zuffa, has steadily eliminated the competition by buying out other promotions and then proceeding to poach their stars and assets.

The UFC has “absorbed” as many as five other promotions since 2006, and in this article, we’ll be going over each one.

Another promotion which the UFC took over in what proved to be the very productive year 2006 for the company, was the World Extreme Cagefighting, a relatively small California-based promotion.

The WEC was initially allowed to operate as a subsidiary under the UFC, serving to promote the lighter-weight divisions.

Most of the UFC’s biggest stars in the lighter divisions started as fighters in the WEC, with many even rising to be champions while under the promotion.

José Aldo, Urijah Faber, Anthony Pettis, and Demetrius Johnson are some of the stars who first excelled in the WEC.

The UFC’s cohabitation with the WEC worked for a time, until in 2010 when the parent company fully absorbed the subsidiary into itself.

Once upon a time Pride FC was arguably the biggest MMA promotion in the world. The body operated out of Japan and was home to some of the very best mixed martial arts talents at the time.

The prevalent allegations of the Yakuza (Japanese mafia) using the organization as a front for money laundering intensified after a series of unfortunate events occurred, including the death of the company president Naoto Morishita.

The bad press and the Japanese people’s own aversions began to affect the business, and finally in 2007, after struggling for several years to replicate the success it enjoyed in its heyday, Pride FC found itself in financial trouble.

Zuffa, certain not to pass up on the opportunity, stepped in and purchased the struggling company.

UFC stars such as Anderson Silva, “Shogun” Rua, Mark Hunt, and Wanderlei Silva, all fought on the Pride FC roster before moving to the UFC.

What initially started as a bold experiment in 2006, when the IFL was created with the concept of producing a mixed martial arts reality TV series, ultimately came crashing down in 2008 when the company tried to buy out some of the UFC’s biggest stars.

In this ill-advised move, the IFL attempted to add more marketable fighters to their ranks, but they went shopping in the wrong place.

The deep hostility that this fostered with the  UFC, a significantly larger and more powerful corporation, led to several operational and financial difficulties that ultimately led to the IFL selling its assets to Zuffa and promptly folding up soon after.

After the dissolution of Pride FC in 2007, Strikeforce represented the only other direct opposition to the UFC’s dominance in MMA promotions.

When Strikeforce acquired the services of MMA legend Fedor Emelianenko on a 3-fight contract in 2009, it looked set to finally get one over the UFC.

This was a move that didn’t pay off, however, as Emelianenko’s unbeaten streak came to an end in Strikeforce, and he would go on to lose 2 more on the bounce.

The gamble did not pay off, and it was unable to get the edge over the UFC. And then, the financial strain of so many high-profile signings and deals began to take its toll. In March of 2011, Zuffa stepped in with an offer that could not be refused, and Strikeforce was purchased under the UFC.

It continued to operate as a subsidiary until 2013 when it was completely dissolved and its top talents absorbed into the UFC.

In December 2006, Zuffa announced that they had purchased select assets from the WFA. This included fighters’ contracts, trademarks, and intellectual property.

The UFC acquired the contracts of notable fighters such as Quinton “Rampage” Jackson, Lyoto Machida, and Martin Kampmann. Additionally, under the terms of the acquisition, the WFA would from then cease all operations.