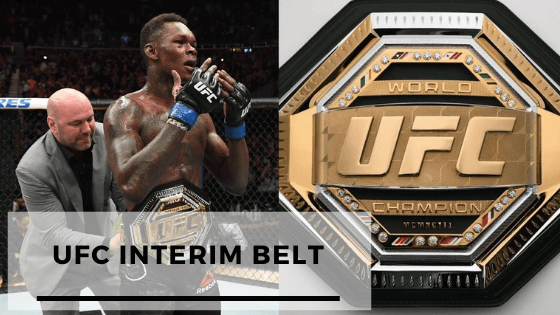 The term “Interim Champion” is a source of confusion and arising controversy in the MMA community.

In this article, we answer the following questions:

What is an interim UFC belt and how does it work ?

The UFC interim title is created when the current champion is unavailable to defend his belt.

This could be due to injuries, contract issues, suspensions, or personal problems outside of the sport.

As the name implies the interim belt is only valid until the reigning champion is able to compete again.

Ideally, the interim championship is contested by the 2 highest ranked contenders in the division.

The winner of this bout is presented with a belt, and they earn a mandatory fight at the champion on his return.

This match is called a “Reunification title fight”.

There have been 21 interim champs in UFC history. 11 of whom directly went on to win the undisputed belt.

Why does the UFC have interim belts?

The UFC needs an active champion in every division.

The primary goal of the UFC is to sell PPVs and one of the surest means of garnering attention is title fights.

So in the instance of a champion being out of competition for more than a year, the interim is the means to ensure title activity in the absence of the fight.

An interim title fight between two top contenders is more than likely to be an eye-catcher.

The winner of the belt is then locked in for a mandatory contest against the champion.

This then builds up a massive hype, riding on the marketing effect of a “Champ vs Champ” showdown.

It is good business for the UFC, and also gives a fighter certainty that they are next in line to fight for the undisputed title.

Is the interim champion a real champion?

Technically, yes. The interim title is a real belt according to the books.

A fighter who wins this title goes into the records as having been an interim champion.

According to the UFC, interim champions are afforded the same financial privileges as a regular champion.

It must be said, however, that in the eyes of UFC fans and fighters alike, the interim title is seen as a glorified title shot.

A fake championship which ceases to exist after the reunification bout.

Several fighters have had derogatory things to say about the belt.

After dismantling Tony Ferguson to win the lightweight interim title, Justin Gaethje tossed his belt to the ground, and said “I’ll wait for the real one.”

Frank Mir had this to say after winning it at heavyweight: “I don’t want to be half a champ”.

While Stephen Thompson, widely regarded as the nicest guy in MMA says “ I think it diminishes the value of the real title, anybody can fight for the interim belt”.

The ultimate goal of an interim champion is to become undisputed.

As far as value is concerned, the interim title is only a stepping stone to the undisputed title.

A good portion of the UFC community thinks the interim belt is unnecessary, inconsistent and have called for it to be scrapped. Here’s why.

In recent times, the UFC has been accused of using interim belts as a marketing tool for their interests.

Either to skyrocket the value of a contender they favor, or as leverage to apply pressure on a champion during contract disagreements.

Francis, who was visiting his family in Cameroon, declined, saying he was ready to fight on the next PPV card on September 25.

Create an interim title bout between Derrick Lewis and Cyril Gane, whom the UFC clearly identifies as a future champion.

This move reeked of pettiness considering that Ngannou was away for just 5 months, and that he was (still is) in a heated contract dispute with the company.

It is also worth mentioning that Francis had earned a title shot and fought twice in 2 years waiting for closure on the trilogy between former champions Stipe Miocic and Daniel Cormier.

No interim belt was announced during this time, even when DC was out for 7 months.

This fiasco left a bad taste in the mouth of fans concerning the interim championship.

The interim championship is a useful tool, and will continue to remain so if it is used with consistency, and only when absolutely necessary.

Is a reunification considered a title defense? Do both belts look the same?

Yes to both questions.

As long as the champion’s belt is on the line, every fight they are involved in is a title defense.

Also both belts are identical, further justifying the claim that it diminishes the prestige of the undisputed belt.

Does Pulling Guard Still Work In MMA Like In The Old Days?

Can UFC Fighters Pick Who They Fight Like Boxers Do?