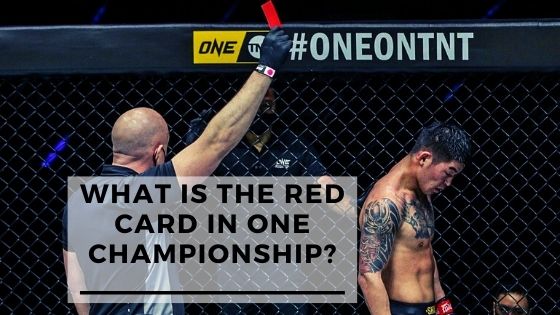 Generally, according to the Unified Rules of Mixed Martial Arts, if fighters commit the actions listed as fouls, it usually results in either a warning, point deduction, no contest, or disqualification in favor of the fouled fighter.

The system of yellow and red cards was first adopted by Pride Fighting Championship.

Since Pride FC did not adopt the unified rules of MMA, failure to initiate any offensive attack or stalling, making no attempt to damage the opponent or finalize the match, and grabbing the opponent’s body with the legs and arms to produce an impasse resulted in a yellow card.

Every card, including warning (yellow) cards, resulted in a 10% reduction of a fighter’s fight purse, this method was aimed to prevent inactivity. Also, once a fighter got 3 yellow cards they were disqualified.

When a fighter commits a foul, listed in ONE FC set of rules, which incapacitates the other fighter and directly affects his chances of winning the fight, the fouling fighter will be shown a red card. A red card means simply disqualification in favor of the fouled fighter.

When a referee gives a fighter 2 warnings in a fight, the third warning is automatically a red card which results in a disqualification of the fighter.

On April 7, 2021, MMA legend and former UFC champ, Eddie Alvarez, was shown a red card for landing accidental strikes to the back of the head against #2 ranked lightweight contender Iuri Lapicus.

After getting warned by the referee, Alvarez continued to hit Lapicus at the back of the head, a move considered illegal in ONE Championship, causing Lapicus to be stretchered out of the cage. Alvarez was shown a red card by the referee which led to his disqualification.

It is worth mentioning that Eddie Alvarez’s disqualification was later officially overturned to No Contest.

Similarly, Shinechagtga Zoltsetseg was shown a red card for a soccer kick (an illegal move) against Yoshiki Nakahara and got disqualified, hence, losing the fight.

Just as a red card in soccer, hockey, etc. symbolizes a participant’s removal from a game due to a foul, a red card in ONE championship similarly results in a disqualification.

Are Long Arms Good or Bad For Grappling (BJJ/Wrestling)?

What Are The Funniest Social Media Accounts For MMA Memes?