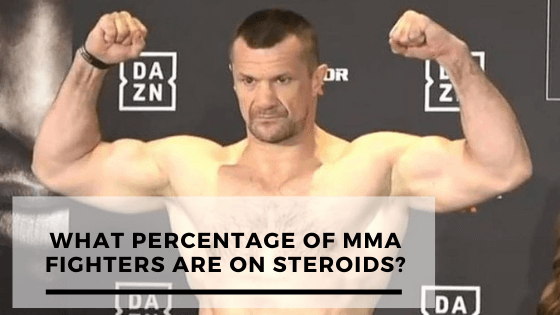 Steroids. The ultimate boosters for any given physical test or exercise.

But how much of this is being respected, especially in the sports where you need strength and endurance like MMA?

Joe Rogan, who by the way claims that 60% of the MMA fighters are on steroid cycles, is using steroids (TRT) himself.

He admitted this in several of the episodes of his podcast.

He even said that the testosterone that he takes makes him younger by at least 10 years.

Well yes, it is true that after your 30th year your natural testosterone starts to have a steady fall and this continues until your last days, however, this is not a reason, nor a justification for taking steroids.

And at last, it is extremely unfair to other competitors which are not taking them.

The way steroids work is, that they boost your system with a synthetic version of your main androgen hormone, testosterone.

This causes all your androgen features like muscle building, facial hair thickness, muscle strength, and endurance to be boosted by a significant amount.

The natural production of testosterone on weekly basis ranges from 75 to 150mg.

On the contrary, the synthetic replacement, or boost is about 1500mg, or even 2000mg, depending on the athlete on top of the natural production.

You can imagine the boost created by this. The benefits are unreal.

Fortunately, MMA is not a sport that solely relies on brute strength and size.

So it might happen that a competitor who is more capable and more technical might easily win against a juiced-up but less technical one.

Nevertheless, the juiced-up one will have an edge.

If he lands just one strike right, due to its power it might be the finishing one.

Since the steroid epidemic started, I’d say in all sports, including MMA, more and more fighters decide to take them and give themselves a boost.

Nate Diaz reflected light on this topic several times in his career.

He claims that he is clean, but he has knowledge and proof that almost everybody in the UFC is on steroids.

Every competitor who has medical personnel to back them up and help them test negative on USADA is prone to taking roids.

As the baseball legend, Marc Grace once said – “If you are not cheating you are not trying”.

The National Institute of Health recently published a story where they elaborate on the use of steroids in combat sports.

According to them, when observing the data on blood analysis from the electronic databases.

It happens that there is a significant increase in the testosterone, cortisol, and adrenaline levels in competitors.

Also, in some of their studies, it is pointed out that this substance abuse is more often in younger athletes.

Using only common sense and visual features, we can say that the abuse of these substances happens more often in the heavier categories.

There are many former MMA fighters who admitted to using steroids.

Take for example Kimbo Slice who said that older fighters should be allowed to use ‘extra vitamins’.

Cro Cop, admitted that he took steroids at some point in his career.

Stephan Bonnar, the UFC hall of fame fighter publicly admitted steroid use. The list goes on.

There are many who admitted, and according to this imagine how many there are that have not admitted and are hiding it.

Is taking steroids a good or a bad thing in MMA?

Morally it is a really bad thing, especially if you look at it as a competitor who is not taking steroids.

However, if you look at it objectively – it has different edges.

It might be good show-wise because the layman’s audience wants to see monsters fight and is thirsty for a fight with big actions.

A layman who watches MMA is not aware of the fighting techniques and cannot judge the fight according to the level of technicality that a fighter has.

It all comes down to size and show.

So, should the sport be divided into a drug-free and steroid-using division?