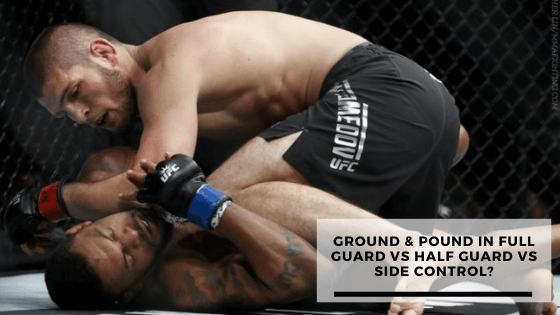 This article will explore the advantages and disadvantages of three different positions: full guard, half guard, and side control.

We will discuss the following:

1. What Is Ground And Pound In MMA?

Mark Coleman, The Godfather of Ground and Pound, pioneered the term in a pre-fight interview in UFC 14.

2. The Three Positions For Ground And Pound In MMA

There are many positions that fighters can be in for ground and pound: full guard, half guard, side control, full mount, and back mount.

Each position has its advantages and disadvantages, so it’s important to know which one to use in a given situation. In this article, we will be focusing on the full guard, half guard, and side control positions.

This can be done from the inside (butterfly guard) or outside (traditional guard) of the opponent’s legs.

The full guard is often used when the fighter on the bottom does not have a good position to attack from and is trying to defend themselves.

It can also be used to set up submissions, such as triangle chokes and armbars.

The fighter on top must establish a firm base to land strikes from this position.

Furthermore, it’ll help to be on your toes to spring away from any traps your opponent might set.

Driving your hips forward to pressure the opponent’s hips will help control their posture.

You can also use your head and arms to lock the position in place while having your opponent carry your weight.

Make sure to keep your elbows tucked in and your arms close to your body as the opponent may try to gain control of one of them.

Finally, you should mix up your strikes.

Some options include punching the body and head and elbows to the face.

An unlikely yet perfect example of elbowing from the full guard position comes from the legendary Mirko Cro Cop.

This can be done from the inside (underhook) or outside (overhook) of the opponent’s leg.

Many MMA fighters prefer being in half guard position to strike as it allows more hip rotation than the full guard position while still defending against some sweeps and submissions.

The overhook half guard is the most common variation seen in MMA as it allows the fighter on the bottom to control the nearest arm of the opponent.

This can be used to set up submissions, such as kimuras and Americanas.

Thus, when striking from the top in a half guard position, you have to form a firm base and pin the opponent’s hips using your elbow.

Once you have their hips locked in, it’ll be much easier to land strikes as they’ll be forced to turtle up.

You can land some significant shots to the side of their head or switch up the angles to catch them off guard.

If they try to close the distance, you can underhook their arm and force them on their back again.

The side control is a position where the fighter on top has passed the dangerous legs of the opponent on the ground and has ended up in a side position.

From here, the fighter on top can rain down some serious ground and pound while also having the opportunity to set up a few submissions.

However, before you do that, you need to control the position first.

There is no point rushing in to attack if you only lose the hard-won position.

So, undertook the arm furthest away from you while remaining tight with the opponent’s chest.

Absorb the pressure of your opponent trying to explode their way out of the position, and then get to work.

One of the most common ways your opponent will defend is by trying to control your punching arm’s bicep.

You can easily use their extended arm and trap it beneath your knee.

You can also go for the traditional and deadly crucifix position.

However, modern fighters are wary of the dangers of being in that position and avoid it.

6. Which Position Is Better?

It really depends on the situation as all three positions have their own advantages and disadvantages.

The full guard is great for entering the ground game; however, it can be hard to land significant strikes.

The half guard provides a mix of control and opportunities to strike.

In contrast, the side control is perfect for punishing an opponent with some serious ground and pound.

Does Bellator Test Its Fighters For PEDs?