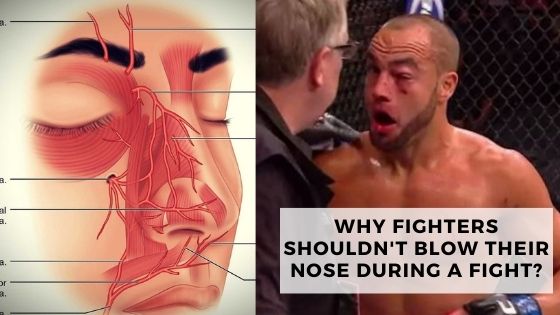 This is a question bugging the entire boxing and MMA community for a while now. What could happen when you blow your nose during a fight.

Everyone who is into MMA and boxing knows that you shouldn’t blow your nose during a fight.

Every time during a break between rounds, you hear the coaches shouting at the fighters not to blow their noses.

The outcome of blowing your nose during a fight was displayed back in UFC 112.

During the match between Anderson Silva and challenger Demian Maia, we saw Maia’s face all swollen a few moments after the break. This was the direct outcome of Maia blowing his nose.

Out of nowhere, we could see Maia’s face become bloodier, and swelling around his nose. Eventually, the swelling was out of control and Maia’s entire eye was blocked out.

Scientific Explanation – Why fighters are told not to blow their nose during a fight?

Around everyone’s eye socket, there is a layer of fat surrounding it. This acts as the protective layer for the skull behind it.

Even though it can absorb a lot of impacts, taking 3 rounds of punches from a 4-ounce glove will certainly do damage.

During punches, the blood vessels around your eye socket are damaged. While some veins are damaged enough to leak some are totally torn.

This causes the blood to flow out of those vessels and settle under the skin. This causes swelling under the eye.

When you blow your nose, the blood flow through those vessels is increased. This is due to the pressure exerted when blowing. This physiological event is called a ‘Valsalva maneuver’.

Unfortunately, this increased blood pressure results in swelling around the face and often will result in a lot of blood loss through the nose. Damaged blood vessels are almost certain during an MMA fight.

Blowing your nose during the fight could cause catastrophic events.

This is the short-term damage. The increased blood pressure does result in swelling and bleeding but it could also cause infections in the long run.

Sometimes the damage is great enough to cause stress fractures in your sinuses and around the eye socket. Blowing the nose could release mucus. This could seep through those cracks and cause bacterial infection.

In the best-case scenario, you could get a bacterial infection and prolonged swelling in the area, and eventually heal.

Worst case scenario, the infection could spread to the brain and cause catastrophic damage.

Listen to the scientific explanation by Brian Sutterer MD

Here is Why You Should Never Trust UFC Rankings

Did Pride FC Allow Steroid Use?