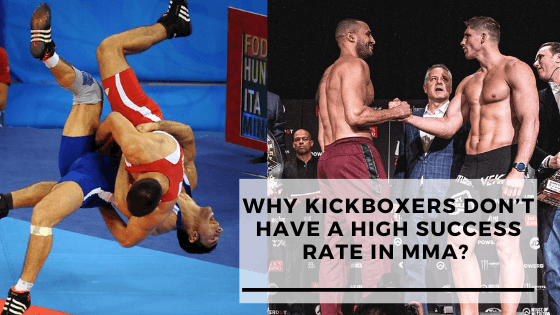 To the untrained eye kickboxing and MMA striking seem to be exactly the same. But the technical differences between the two sports are actually pretty big.

And this explains why most kickboxers/K1 fighters go on to have losing records when they step in the octagon.

The fact that elite kickboxers don’t always do well in MMA is evidenced by history.

All of them ended up with losing records.

After going 5-7 in the UFC, for example, Pat Berry moved back to Glory, where he retired.

There are some notable recent exceptions

Stephen ‘Wonderboy’ Thompson held an undefeated kickboxing record before stepping in the octagon and KO’ing multiple opponents with his superb striking.

But even here, where kickboxers have found success, we have to mention a key component.

When Adesanya went up to face the then light heavyweight champ, Jan Blachowicz, he got absolutely dominated on the ground.

And the same can be said for Wonderboy, he’s coming from back-to-back losses to wrestlers who simply pinned him down for the whole match.

And in both cases, there was nothing they could do. They were simply useless on the ground.

And here’s one of the main technical differences: in kickboxing, there is no takedown threat.

As soon as you convert to MMA, grappling becomes a serious problem.

This has an immediate effect on a fighter’s striking because of several reasons.

First of all, their stance will need to change to be in a position to successfully defend takedowns. Kickboxers tend to fight from a more upright position, which means a higher center of gravity for a grappler to attack.

MMA fighters with a Muay Thai background will constantly clinch a kickboxer, who typically benefits from a longer range distance, from where he can throw kicks.

Elbowing is not allowed in K1, so a kickboxer won’t be used to seeing those coming.

Kickboxers also rely on their gloves for defense

They aren’t used to using their footwork to angle off because they simply turtle up and block strikes.

This technique is completely useless in MMA, where gloves are much smaller and have little to no padding.

What about wrestlers then, are they having more success in MMA compared to kickboxers?

Compare this to how most wrestlers transition to MMA and you will get a completely different look. Their success rate is much higher.

The best example is Kamaru Usman

The Nigerian Nightmare is the current welterweight champion for the UFC.

Usman’s background as an NCAA Division II wrestler enabled him to achieve success in the UFC.

Colby Convington, an NCAA Division I wrestler has also found success in MMA.

Setting his marketing strategy aside, he is one of the most dominant fighters in the UFC.

Daniel Cormier, Joel Romero, and the list goes on and on.

Maybe the two additional examples to mention are:

Practicing combat sambo, Soviet wrestling, no fighter has found an answer to their grappling abilities. Khabib retired after going 29-0 in MMA, and Islam, currently ranked #2 in the lightweight division, is projected by many to win UFC gold and become the next champion.