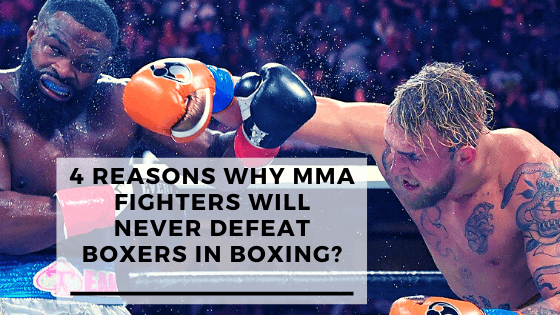 MMA fighters just don’t have the boxing skills that boxers have, why?

1. It’s all about speciality

MMA fighters don’t spend 100% of their time on their feet. And, even when they do, they don’t focus only on boxing.

They have to focus on, checking leg kicks, stuffing takedowns, and defending against elbows and knees.

2. Boxing is all about defense, in MMA defensive fighters are booed by fans

The thing is that, even if you could defend yourself effectively, defensive fighters are known as boring fighters.

They become less and less popular, which means less money and fewer opportunities to get into big fights.

Max Holloway and Ricardo Lamas famously agreed to spend the last seconds of their fight trading punches in the middle of the octagon.

Many fans have said this is one of their favorite moments in UFC history. Here’s the thing though. If you think that Holloway only does this because he has no defensive skills, you’d be wrong.

All you have to do is look at the five punches in a row he slipped – without looking – in his Calvin Kattar fight.

Max *actually* pointed to the floor and asked Lamas to stand and bang for the final 10 seconds 🔥 pic.twitter.com/241gRSSv3e

3. Half of head movement techniques in boxing will get you knocked out in MMA, so MMA fighters don’t bother learning them

Going back to the technical side of things, boxers duck punches all the time. Head movement is drilled constantly.

Canelo Alvarez, currently the best pound-for-pound boxer, has displayed his head movement skills over and over.

Just look at his fight against Daniel Jacob.

The P4P king returns to the ring, next Saturday 👉 https://t.co/j4BIUfmyff pic.twitter.com/KAKn1iZaBY

In MMA it just doesn’t work that way. If a fighter leans forward too much, even if they duck the punch, they are opening themselves up to a front kick or a knee.

These counters are very common in MMA. All this to say: level changes don’t work the same way in MMA as they do in boxing.

4. The size of the gloves changes the whole game

Mayweather was famous for being a defensive fighter above all. He is ranked by many as the greatest defensive boxer of all time.

Mayweather was famous for using the traditional Philly Shell defense.

From there he would make his opponents miss constantly, slipping and rolling with punches. This would never translate to MMA.

Boxing gloves are much bigger than MMA gloves, and they are an important tool in slipping and rolling punches.

What is the UFC Belt made out of?