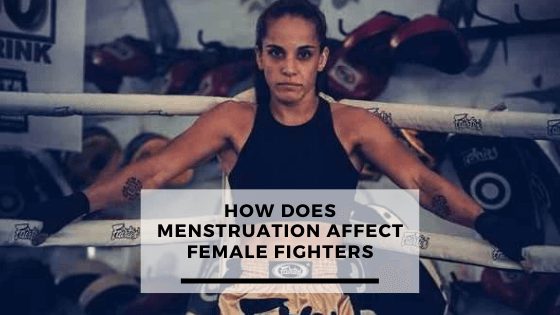 For some reason, this topic has gone under the radar in the world of sports in general, it has been treated as a “taboo topic” in many respects by both men and women.

Perhaps, maybe some women might feel ashamed to talk about it, or some men might not understand, but whatever the reason is, this conversation rarely gets brought up.

Well, not today, because we’re going to be looking at how menstruation affects the performance of female fighters.

What is menstruation/Period all about?

In simple terms, it is the normal bleeding that occurs in most women once a month as a result of the person not being pregnant.

Do all women menstruate?

In most cases, yes they do.

Although there are some exceptions to this; the aforementioned pregnancy, infections and extreme levels of stress could all act as reasons why a woman might not menstruate when it’s time.

Given the above side effects that accompany periods in women, it begs the question;

How do the side effects affect female fighters?

During their menstruation, women are more sensitive to everything, so putting into consideration a fighter, pain is felt to a far greater degree.

It is reported that most women gain around 2 pounds when they’re menstruating, as well as an increased urge to eat more, and when you remember that fighters have to make weight, this certainly becomes a problem.

In a sport that requires you to hit another person, this is perhaps the most critical.

When women are on their periods, they become a lot more clumsy and careless; suffering this in a fight will not help.

Women bleed during their periods, this results in them being a lot more tired than they would be if they weren’t menstruating.

For a fighter, your ability to fight at your normal pace becomes heavily compromised.

Considering the above effects that menstruation could have on a fighter, it becomes imperative for measures to be taken to combat these effects.

How do they cope?

The direct cause of this is unclear, but a combination of factors such as low body fat percentage, high-stress levels from workouts and training regimes acts as major contributors to MMA athletes losing their periods.

But is this applicable to all fighters?

A lot of fighters still go through menstruation, so they check their calendars just before accepting fights, and if it falls in and around the week of their period, they call it off altogether.

Despite the above numerous side effects of being on your period while fighting, there is actually a flip side;

Paige Vanzant, a former UFC flyweight fighter talked about how fighting while on her period made her angrier and hence gave her a “killer Instinct”.

The validity of her claims remains to be seen, but if she certainly feels that way, it means that there might be other female fighters who prefer fighting during their periods.

So this is where we leave it for now, female fighters go through enough already, then add dealing with periods, increases their already herculean task.

Promotions should consider this topic and try to be a lot more lenient with female weight classes, and also increase enlightenment about the matter.