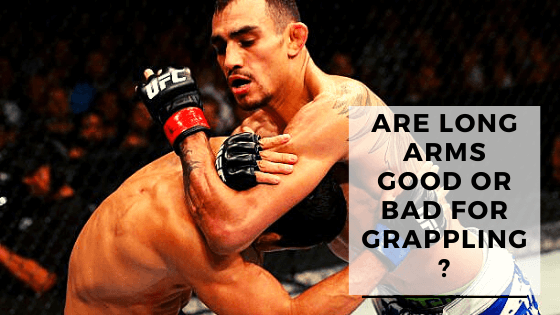 Body types make or break fighters’ careers. Or do they? Let’s see…

Nobody is arguing that long reach is an advantage in striking, but in grappling things might be different

The fact that it’s even called an ‘advantage’ should be enough to argue that having long limbs actually helps you as a fighter.

Arms and legs are like a spear – especially if you have a reach advantage over your opponent.

If you can keep proper distance and positioning, you can become very dangerous.

But what about grappling? Is having long arms going to help or hinder your game?

Cases where long reach is a disadvantage in grappling

If we’re assuming you have long arms because you’re a taller person then you will find yourself at a disadvantage.

Taller people will always tend to hold a higher center of gravity.

In wrestling, this may mean it’ll be easier for your opponent to attack your legs and knock you off balance.

The key in any Brazilian jiu-jitsu bout is to defend the space between your elbows and knees.

If you are a taller person then there’s simply more ground for you to defend. In other words, your opponent will have more openings available to them in an offensive cycle.

You may find yourself at a disadvantage since you present a much bigger target to attack. It’s all about leverage

In BJJ, longer arms will help you be more effective in open/full guard.

There should be little doubt that this will help you since you’ll be able to stretch out almost any other fighter with ease.

What about long legs in grappling, especially Brazilian Jiu Jitsu?

Longer legs will also help to flatten out your opponent when in a body triangle.

In gi competition, the biggest advantage while in top control is that you get to keep your posture straight up, therefore minimizing the ability your opponent will have to grab you.

Even if they do get ahold of you they will probably tire themselves out in the process.

Longer limbs will also give you an edge because you can go for submissions from different angles that a person with a different body type won’t.

Just look at Leandro Lo. He is very tall with long arms. Outside of, probably, Gordon Ryan, Lo is the best pound-for-pound jiu jitsu pro in the world right now.

Are long arms an advantage in wrestling?

In wrestling, long arms will mean you can excel at killing single-leg shot attempts by attacking/picking the ankles and/or knees.

It’ll also be easy for you to develop cradles and leg rides.

Bo Nickal matches are a great example of these techniques used by an athlete with this body type.

Ultimately, with grappling, it all comes down to leverage.

In BJJ, the Anaconda and D’arce chokes were basically made for long-armed practitioners/competitors.

Basically, longer arms will work better for any head-and-arm chokes. In wrestling, it’s more of the same.

There will always be pros and cons for every body type.

The trick will be to train in order to minimize the disadvantages and maximize the advantages.