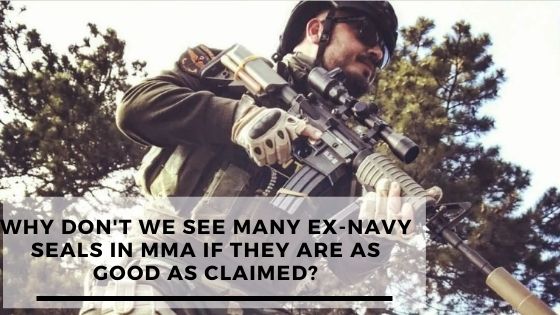 It is commonly known that becoming a Navy SEAL is not easy.

But really how difficult is it to become one taking into consideration only the physical readiness needed to pass the physical tests?

The answer is not much. If you look at the physical exercises and the requirements for the physical test you can see that they are not so difficult.

However, imagine doing the above exercises during +113 F weather, or -5 F.

That’s what makes it difficult.

What is difficult when becoming, or being a Navy SEAL is the different conditions in which you need to perform at your best capability.

Imagine running, or even better – swimming for 10-15 minutes in freezing cold temperatures, or doing so in hellish hot weather.

This is what makes SEALs day on the field difficult.

On top of that, you need to carry not only your body weight but a full 150-pound backpack plus weapons.

The main martial arts that the Navy SEALs are good at are Muay Thai, boxing, and Jiu-Jitsu.

There are, however, differences in character and instinctual differences between MMA fighters and Navy SEALs.

Being a successful pro-fighter means being able to blast out full force at your opponent.

And rely on your instincts on what to do at a certain point of the fight and do it without too much thinking of the effect that it will have on the complete situation.

Being a Navy SEAL, however, means thinking thoroughly before acting.

You have to have those instincts under control and filter them in your brain before acting.

On the other side, some SEALs are not the best athletes.

Their lack of explosiveness, coordination of movement, or agility and flexibility might be the physical stop that they encounter when thinking about competing in MMA.

So the SEALs do not spend as much time on fighting training as MMA fighters do.

What is common to both professions is that they do take really hard work to succeed.

Why we do not see many SEALs in MMA is because they are highly focused individuals.

As to why they are not in parallel competing in MMA and working in the Navy, it is really simple, they cannot risk the possible injuries and recovery time.

How many SEALs do we know that would transition from the Navy to MMA?

How many MMA fighters do we know that might transition into the Navy?

As highly professional individuals, both these professions require 100% devotion and love for the work.

That’s why they love what they do and that is why we love them for what they are.

What Are UFC Feeder Leagues?