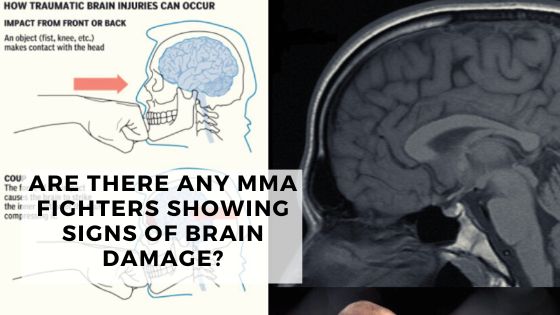 You got to wonder with MMA fighters and boxers taking hundreds of thousands of blows to the head while training and during fights, do they get any brain damage?

The truth is they do get a lot of brain damage. It has been called many different terms, but today it is called “chronic traumatic brain injury”.

This is one of the reasons that gloves were introduced. Even with heavily padded gloves in boxing, boxers still get a lot of brain damage. In MMA it is even greater with the tiny gloves they use.

These have a lot of long-term consequences. New studies have shown repeated blows to the head, like the ones fighters go through on a daily basis cause Alzheimer’s, and Parkinson’s. This was what happened to Mohammed Ali, as he spent the last of his days with Parkinson’s.

How many fighters are showing signs of brain damage?

We have seen a few fighters of this generation struggling due to the damage that they took to the head. A fighter could get CTE even after 20 years of retirement. So, it is hard to realize the consequences until it is too late.

So how many fighters are affected by brain damage? Research shows that on average fighters have 25 to 33% brain-related injuries.

The lower weight classes have fewer injuries since they do not take a lot of rough blows compared to heavyweights.

Heavyweight fighters often have much more brain damage than other fighters due to the sheer power of the shots they take.

So how many fighters have brain damage while they are active? In MMA the number is more than 25%. When fighters retire, if they had a long and active career, brain trauma is almost certain.

This means that 1 out of 4 fighters that step inside the cage, come in with a head injury.

The research further proves that 71% of injuries in MMA are directly related to brain damage.

While heavy punches that knock you out could get you concussions, repetitive light strikes cause CTE. That is “chronic traumatic encephalopathy”. This is similar to Dementia in many ways.

Can an MMA fighter live their life normally while suffering from CTE?

Even though fighters suffer a lot of brain damage, most of them are not crippled by it in any way. With a slightly damaged brain life goes on. You rarely see fighters who have suffered a lot due to brain damage.

Non the less brain damage is a serious issue. But with modern medical standards, it is somewhat under control.

If you are wondering if there are any ways to reduce the damage, you should know that any kind of head blow will result in brain damage over time regardless of the size of the gloves. Boxing already uses big gloves, if it gets any bigger they’d be fighting with pillows.

In MMA, fighters suffer lethal blows from punches, knees, elbows, and many more. So fighting with larger gloves won’t make much of a difference.

Can the UFC Strip a Champion’s Belt for No Reason?

Why Do Heavyweight Fighters Have Longer Careers?