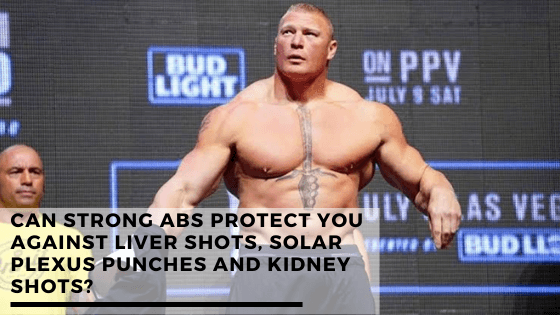 Having strong abs creates resistance to strikes to the midriff, and can reduce the effect, but only to a certain extent.

By clenching your abs, you can deflect the impact of a punch and its effect on your inner organs.

More so, if you have developed strong abdominal muscles.

But in professional fighting, defensive skills are much more effective than strong abs in protecting your inner organs.

A punch to the liver, kidney, or solar plexus is a crippling blow.

Ironically, these areas are neither well protected by flesh mass nor the ribcage.

Despite having well-muscled abs, a perfectly placed punch to the liver, kidney, or solar plexus will still cause devastating pain.

Just the same way a neck can be thickly muscled yet leaving the trachea open to damage from even low-powered strikes.

Toned obliques and a strong core can help deflect some of the impacts of the strike, but organs will remain vulnerable, and there’s only so much you can do to toughen them.

Against an average person, yes, you stand a better chance.

But against a trained puncher, with decent form, throwing proper hooks to the body, swinging from fully torqued hips.

Even the most muscled men will fold when that punch lands full-on, especially if they’ve never taken those shots before.

The greater part of dealing with body strikes is getting used to the pain.

When you don’t know what a liver punch should feel like, and you eat one for the first time.

The overload of pain can disable you.

Knowing that a perfect punch can always hurt you there, the best way to protect your vital organs is to not get hit on them.

As with every other kind of punch, it’s the ones you don’t see coming that really rock you, so your mental game plays a big role.

When you’ve done your fair share of training and sparring, you find that you can eat heavy shots and get folded by weaker strikes that you didn’t anticipate.

From muscle memory your body begins to roll with punches, finding little turns. shifts and angles, clenches, subtle things that just take the sting away.

You start to anticipate the impact and your body finds a better way to react from muscle memory, deflecting the shots from landing flush on your vital points.

Learning to keep your elbows tucked in will also do more than abs in protecting your inner organs.

Former heavyweight champion Brock Lesnar is built like a comic superhero, and remains one of the built guys to fight in the UFC.

He took a kick to the liver and couldn’t keep fighting.

He said afterward, “It felt like I got hit by a horse”.

By working on your defense keeping your elbows tucked in, anticipating punches and rolling with them, clenching your muscles, and exhaling sharply on impact.

You stand a better chance of coping with shots to these sensitive areas.

However, there is no way to completely toughen up your liver, kidney, or solar plexus.

The best defense for your inner organs is to be good enough to rarely get hit clean.