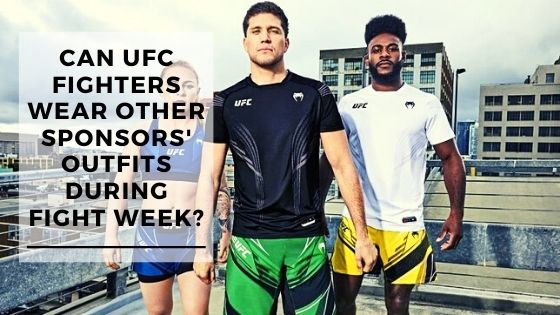 Can UFC fighters wear other sponsors’ outfits during fight week?

With fighters walking out to the cage with several sponsors around their apparel, the question on everyone’s mind is, do they get paid for it?

Obviously, most of those sponsors are in a deal with the UFC. So some might think that only the UFC gets paid.

Actually, the fighters get a share from the sponsors themselves. Do they get a fair share? If not can they seek private sponsors?

Private sponsors were allowed in the UFC a few years back, during that time, UFC didn’t have any major sponsors, so the fighters were allowed to get different sponsors for themselves and make some extra pay.

Though the fighters benefited from that, the UFC did not.

You do not see different athletes with different sponsors in any other sport. So as the UFC grew they implemented a similar policy.

One of the biggest deals for UFC was with Reebok back in 2014. According to that deal, the fighters were provided with Reebok gear during fight week.

This included every single part of the outfit, including hats. And the fighters were not allowed to seek any private sponsors during fight week.

In recent times the apparel sponsor might have changed but the policy is similar. Now that Venum sponsors UFC outfits, fighters are supposed to wear Venum gear.

With Venum taking over, fighters are getting a slight increase in pay over the Reebok deal.

Other than the gear you might see that is labeled with a ton of other ads, Do fighters get a share from those sponsors?

Actually, they don’t. Even though the fighters advertise the products by wearing them, the UFC will only be rewarded.

But with Monster energy drink, fighters are allowed to make a deal. Not every fighter does a deal with Monster, but those who do are paid.

Here is a look at the new fight week incentive pay structure, which will begin with UFC Fight Night on April 10. The aesthetic of the Venum fight kits will be revealed next week pic.twitter.com/Nmd70eOMpO

But what about getting sponsors outside the UFC?

Fighters are allowed to get sponsors and advertise their own products, but they cannot do so during UFC fight week.

During fight week, UFC fighters and their teams are only supposed to wear outfits that are provided to them.