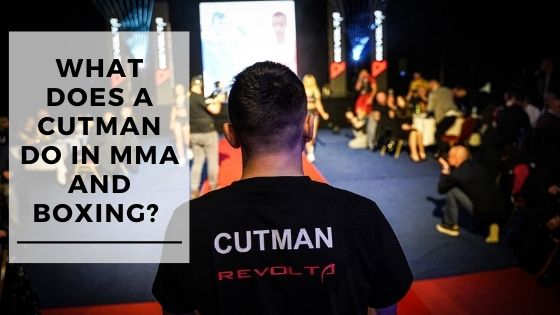 ‘Cut me, Mick’! Rocky Balboa’s famous words to his trainer, after Apollo Creed badly beats his face to a pulp.

Nearing the end of the fight, Rocky’s eyes are so swollen that he can barely see. It seems to be that the fight is over. Or is it? Enter: THE CUTMAN. Seconds later, Rocky is up and at it again, ready to face the final round.

The Italian Stallion may have lost that fight, but it certainly wasn’t because of his cutman’s poor skills.

In MMA, just as in boxing, the cutman has a crucial role in any fighter’s team and can be a major factor in the outcome of the bout.

What does a cutman do in MMA and Boxing?

The cutman is in charge of treating and preventing damage.

They do this in between rounds, during rest periods. While the fighter catches his breath, drinks some water, and listens to his coaches’ advice, the cutman will silently begin to work.

An average work night for a cutman will usually involve dealing with lacerations, bleeding, and swelling.

The cutman’s job actually begins before the fight even starts.

They will usually apply vaseline to the fighter’s face. This makes the skin more slippery and elastic, which reduces the risk of tearing. At the same time, a cutman will typically tape a fighter’s hands, protecting tendons and bones.

Since rest periods are so short (one minute for professional MMA), the usual treatment is limited to first aid.

In order to deal with swelling, for example, a cutman will usually apply pressure with an ice bag or enswell. As the skin cools, the swelling reduces.

The main focus of a cutman’s work, however, is targeted against lacerations. Cuts literally give them their work name because excessive bleeding from a cut might mean the end of the fight.

If the assigned doctor says the fight can’t go on, then the injured fighter is declared the loser of the bout.

Lacerations are treated through the use of a cold towel. The area of the cut is cleaned and cooled, slowing down the flow of blood. An epinephrine-soaked cotton swab is firmly applied to further decrease blood flow. Medicine is used to help with coagulation and vaseline is applied to help prevent additional damage.

Who is the best cutman in MMA?

It would be difficult to argue against considering Jacob Duran, most commonly known as “Stitch” as the best cutman in MMA history.

Duran has acquired a bit of a legend status over the years, even appearing in films like ‘Here Comes the Boom’ and both ‘Creed’ movies.

While working for the UFC, he was assigned to a significant number of top fights, including Cain Velasquez, Lyoto Machida, and Forrest Griffin.

“Stitch” is well respected within the MMA community. Proof of this came back in 2015 when Duran was let go from the UFC.

Notable UFC fighters, such as Gilbert Burns, current Bantamweight Champion Aljamain Sterling, and Nate Diaz -to highlight a few- publicly expressed their disappointment, citing him as one of the best in the business.

Early in 2016 Duran signed with Bellator MMA, a promotion second only to the UFC, at least in terms of popularity within the MMA community, as a cutman.

He is held in high regard in the boxing world as well. “Stitch” worked in Tyson Fury’s corner for his February bout against Deontay Wilder.

What is the training of an MMA cutman? / How do you become a cutman?

Not all fighters can afford the services of a professional cutman. Many times, this responsibility is left to the cornerman.

You do need an athletic license for the job. However, there is no formal training to become a cutman. Most are self-taught or have picked up the trade from other already trained cutmen.

Can a nurse become a cutman?

There is no prescribed background for this particular trade.

A nurse’s skills and experience would definitely help, although there would need to be quite a bit of mentoring and direction in the process.

For instance, a nurse wouldn’t immediately know how to wrap a fighter’s hands.